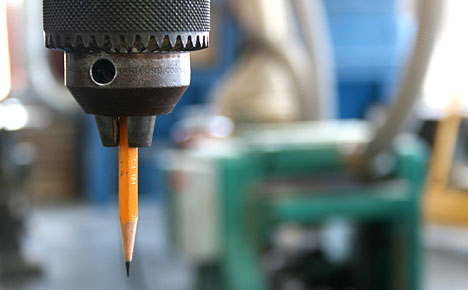 Half technical, half intuitive, the design process is tough to explain. But that’s my job—I’m a design writer. I write so you don’t have to, putting into words the work that you’d rather do than write about. But write you must—website copy, proposals, captions, emails to clients—and though the worse designers are at it, the more work I get, in the spirit of collaboration I’m going to share my secrets. So what if it puts me out of a job.

What follows are five fairly broad tips to keep in mind. Many of them will probably sound obvious. Some of you might be following these suggestions already. That’s good, but having them explained like this will help you see what you’re doing right, or simply give you a new way to think about how you’re already writing. It’s by no means an exhaustive list; add more suggestions in the comments if you want. My goal is to get designers thinking more about writing the way writers do—as a tool, a craft, and yes, an art in its own right—rather than a necessary chore. Your training as a designer will influence your writing, and your work at turning ideas into narratives will influence your design, and who knows, that might not be a bad thing. Pencils ready?

Like designing, writing can straddle the line between art and craft—half blinding flashes of inspiration and unexplainable moments of brilliance (maybe a little less than half), and half moving words around, making and breaking sentences, typing commas then deleting them.

1. Use your skills. You’re a designer, which means you’re good at the same kinds of things writers are good at, but you use different tools. You’re a fixer: you work within constraints to find elegant solutions to complicated problems, and that’s kind of what writing is, too. So, faced with a writing task, do what you do best. Break it down into a problem you can solve. Ask yourself: Who’s this for? What’s the big idea? What are the pieces I’m using? What do I want to say? Like designing, writing can straddle the line between art and craft—half blinding flashes of inspiration and unexplainable moments of brilliance (maybe a little less than half), and half moving words around, making and breaking sentences, typing commas then deleting them. Nuts and bolts stuff. If you get too caught in one side, move to the other. Writing’s about thinking big and thinking small, putting complex ideas into simple boxes, and you can do that.

2. Kill jargon. Like any field that has to fight for relevance, design is mired in jargon. I’m talking not only about technical terms, Adobe-isms, and that sort of thing, but also verbal SUVs—big, pointless words that look fancy but don’t do anything. Dialectic. Utilization. Orchestrate. Dynamic. Synthesis. Do what Michael Pollan tells us to do with food: ask, would my grandma use this? If not, scrap it, and tone things down. Remember, design is a mystery to most people. Make it real and relatable—and yes, relevant—by using real and relatable words. Read Ralph Caplan’s essay “Theoretically Challenged” for a sense of what I mean (the PDF is here, thanks to SVA). This is the kicker: Unfortunately, in design, as in many other fields today, there is a strong drive to … complicate description in the belief that complication in itself represents substance and depth. So we borrow arcane language from disciplines historically associated with substance and depth. In design the mathematical term parameter is used to mean nothing more than constraint; the engineering term feedback is used to mean nothing more than response; the logics term paradigm is used to mean nothing more than model; viable (a biological term) is used to mean feasible. Or, often as not, to mean nothing at all.

On a related note, think about verbs. Designers aren’t usually shy about having their work say or do things, but you wouldn’t know it reading some of their writing. Often, the design for a dining table won’t “capture the thrill of a Medieval feast,” say, it will “strive to capture the trill” or “seek to capture it.” These verb-plus-infinitive constructions (sorry for the jargon) are just plain boring. Don’t be shy—after all, if your work is only trying to do something, why should we care?

A chair may strive to illuminate dialectics, but you probably won’t talk about yourself that way. A little informality goes a long way.

3. Tell a story. When you’re captioning an example of your work in a portfolio or on your website, or when you’re explaining your work to a client, think less about what it is, and more about how it happened. You should be able to explain the project’s main concept in a hundred words; if you can’t, you might want to rethink your design. Focus instead on the thought process behind the work. Why? First of all, it’s more interesting to read. We’re narrative creatures—our minds are geared to ask, “and then what happened?” before they ask, “what does it mean?” We want a story. Tell us how you thought through the proposal, what you struggled with, where the epiphanies came, what changed, what didn’t. It’ll make the work more personal, and more unique.

Look at how Michael Bierut explains Pentagram’s redesign of the Saks Fifth Avenue identity. But simply reinstating a 30-year-old logo wouldn't be enough. Saks was happy to emphasize its heritage, but it was even more eager to signal that it was looking to the future, a place of constant change and surprise with a consistent dedication to quality. In our early creative sessions at Saks, we’d gathered a lot of visual inspiration. The team kept coming back to the boldness of artists like Franz Kline and Barnett Newman. Was there a way to get that kind of dramatic scale and energy into the program?

Which brings me to…

4. Don’t be afraid to put yourself into your writing. Use the first person, making the subject of your writing yourself, not the thing you designed. This helps in a couple ways. It makes you less likely to over-season your writing with fancy jargon—a chair may strive to illuminate dialectics, but you probably won’t talk about yourself that way. It makes your work more personal, which makes it more interesting to read. It also makes you, your work, and design in general, more accessible and less formal. A little informality goes a long way.

Akiko Busch (no, she’s not a designer, she just writes about it) is great at this. When she writes about a vegetable peeler, say, she writes about her vegetable peeler. …it does seem apparent that the shape of the things we use, these ordinary kitchen utensils like potato peelers and cucumber slicers, can engender not only better living, but also better human behavior. When you think of it this way, it makes all the sense in the world that the OXO vegetable peeler came into being because a man wanted to help his wife; the result was an act of kindness disguised as a kitchen accessory. Possibly this is what the OXO company means when it talks about making everyday living easier, and maybe this is what my son’s sixth-grade teacher had in mind as well. (from “The Uncommon Life of Common Objects”)

Michael Bierut brings himself into the explanation of that Saks bag: Of these, one stood out, the logo drawn in 1973 by Tom Carnese, adapted from a signature introduced almost twenty years before. In many people's minds, this still was the Saks logo. By coincidence, I knew it well: it was the logo that was at the heart of the identity system designed by my first boss, Massimo Vignelli, shortly before I started working for him in 1980.

And Chip Kidd … Well, he might be the master of this technique. Here’s how he explains his cover for “Jurassic Park.” It’s all about him: what he does, what he thinks. A bit of an ego? Yeah, OK. But it’s damn entertaining to read. Notice how he’s concerned more with the narrative of the process than trying to (striving to?) puff up big ideas. We needed a dinosaur, but how to render one without making it look like a pulp magazine? Somehow we had to show it … without showing it. […] On the stat machine I blew up a diagram of a Tyrannosaurus Rex skeleton, laid a sheet of vellum over it, and traced it with a Rapidiograph mechanical pen. As I went along, I selectively obscured parts of it, so the effect was more like that of an x-ray in reverse. To give it as much of a sense of menace as possible, I sharpened the teeth, the claws, the ribs. I also “cheated” the holes in the head a bit to give a clearer sense of where the eyes and nose would be. (from “Chip Kidd: Book One.”)

5. Finally, and most importantly, don’t say too much. There’s a lot of fluff in design writing, a lot of bullshit. When describing the narrative of a project, if you don’t have a reason for making a certain choice (if the only reason was “it looked good”), then be honest. Or make a different choice that has a better story behind it. What you absolutely shouldn’t do, is make something up to justify and aggrandize your work. Typically, you can—and should—cut ten percent of all the words you write. So spare us all, and keep it simple.

On that note, here’s a wrap-up: write about yourself, write a story, write real words, don’t write too much. And if all else fails, hire me.