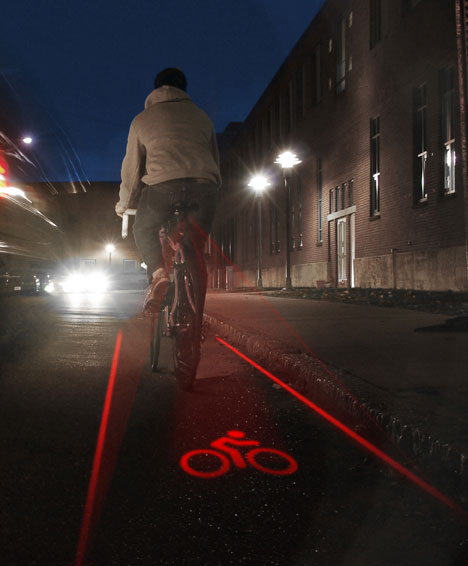 A close brush with a distracted driver is enough to intimidate the most avid bikers from riding at night. The problem isn't just about visibility, as safety lights are effective at capturing the attention of a driver. However, these lights are typically constrained to the bike frame, which highlihgts only a fraction of the bike's envelope.

Bike lanes have proven to be an effective method of protecting cyclists on congested roads. One key is that the lane establishes a well-defined boundary beyond the envelope of the bicycle, providing a greater margin of safety between the car and the cycist. Yet, only a small fraction of streets have dedicated bike lanes, and with an installation cost of $5,000 to $50,000 per mile, we shouldn't expect to find them everywhere anytime soon.

Instead of adapting cycling to established bike lanes, the bike lane should adapt to the cyclists. This is the idea behind the LighLane. Our system projects a crisply defined virtual bike lane onto pavement, using a laser, providing the driver with a familiar boundary to avoid. With a wider margin of safety, bikers will regain their confidence to ride at night, making the bike a more viable commuting alternative.

While we have our doubts as to its efficacy, we feel this is one of the many design shots that have to be fired before the ultimate solution is discovered.