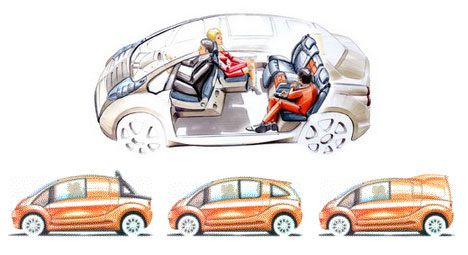 We were excited when we heard about Zero Pollution Motors and their air-powered car back in '07, but with no news from them in all of '08, we assumed that they folded.

The good news is they're still cranking, and will reportedly begin taking orders this year for their air-powered cars, allegedly deliverable in 2010.

If you can, imagine a vehicle that runs on air, achieves over 100 gas-equivalent mpg and over 90 mph, has zero to low C02 emissions, seats six, has plenty of space for luggage, cuts no safety corners, and costs no more than an average economy to mid-size vehicle.

This is the expected performance of the revolutionary compressed air vehicle that Zero Pollution Motors (ZPM) is introducing to North America. The vehicle is powered by the Compressed Air Engine (CAE) developed by Motor Development International (MDI), a 15-year old company based in Nice, France, and headed by inventor and Formula One race car engineer, Guy Negre.

ZPM will begin taking reservations in mid-2009 for US deliveries of our compressed air vehicle in 2010.