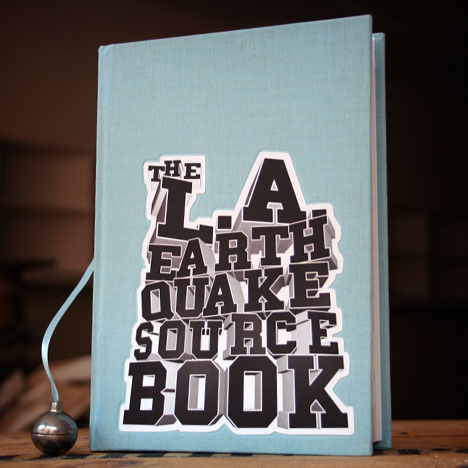 Amazon's publicity blurb for The L.A. Earthquake Sourcebook bills it as "the coolest earthquake preparedness-book ever published," which I imagine to be true, but I also can't think of much competition. A collaboration between Stefan Sagmeister and The Art Center College of Design in association with the L.A. Earthquake Get Ready Project, the Sourcebook juxtaposes essays by experts like FEMA Director James Lee Witt with excerpts from authors like Joan Didion. The essays, fiction and graphic design are all interesting and on more than one occasion, I was curious to look into the works of the fiction authors included because the excerpts left me wondering about the works profiled after reading the short three to five page teasers.

The problem, both with the book, and explicitly acknowledged by the authors is that people (presumably both readers and California residents) don't really want to be reading or hearing about "the big one." Despite plenty of content and good intention, the graphic design, fiction and informative work each seem to exist in their own planes rather than coming together in synthesis. Individual graphic exercises like Clifford Elbi's transcription of the names of faults on the lines of the hand in a palmistry chart can provoke thought and inspire conversation, but most of the graphic design serves as bookends for essays rather than providing a template for action. At the very end of the book pages from Martin Kaplan and Darren Ragle's graphic novel "A River in Egypt" actually begin to combine graphic elements with earthquake advice on the same page, but the rest of the book feels more like a collection of (very good) poster design shuffled between informative, but somewhat disconnected essays. That said, I was never bored while paging through the book, which may be the highest praise to which an earthquake manual can aspire. 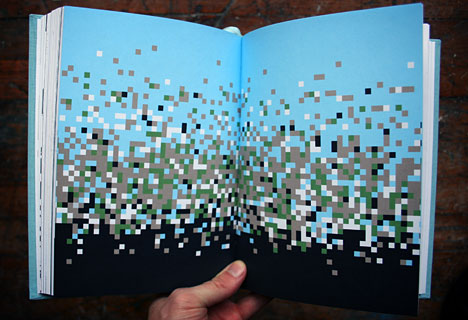 Between the striking posters provided by Art Center students and the fiction excerpts, the Sourcebook does include lots of amazing science content by esteemed geologists from CalTech, multiple seismologists and a spate of government disaster agency employees. Essays cover topics as wide ranging as why it's virtually impossible to predict the next major earthquake to why standing under the doorframe isn't the best idea in modern house design. I deeply enjoyed and respected reading about James Lee Witt's childhood and how it shaped his ability to provide disaster relief just as much as learning how preparedness inevitably trumps a capable government response. Though Sagmeister's involvement with the Sourcebook shifts the emphasis of the book toward its graphic elements, I think it does offer several lessons to industrial designers, most notably in it's observation that deaths in earthquakes are a consequence of architecture, not nature. Indeed, a single human being walking through a natural environment during an earthquake is in much less danger than one in a car on an overpass. In that sense, by framing a fundamental human toolmaking issue in the face of a problem, the Sourcebook encapsulates what it means to be a designer. We solve human problems, and in the modern world, many of the problems people face are problems with designed objects rather than with nature. Indeed, the major issue tackled by the book is not design, but human complacency. 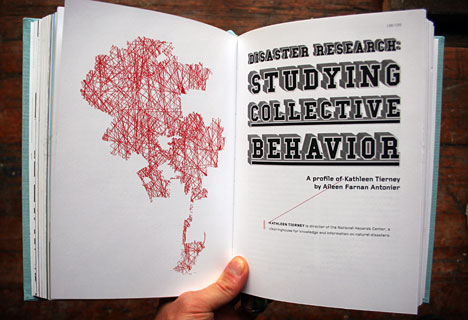 Perhaps part of the difficulty is that the experience of living through an earthquake is visceral and untranslatable to words or images. As someone who's only experienced the slightest of tremors in a California visit, rather than high magnitude earthshaking, I'm not certain whether I'm the ideal audience for the book or entirely too far from the phenomenon to connect. Reading essays about previous quakes by the authors within does thrill and inform, but it simply cannot resonate in my amygdala as it would with a survivor. Therein lies the problem. Readers will doubtless find the Sourcebook informative, but while amazing graphic work like Ahjung Baik's transposition of a streetmap of LA onto the sides of jumbled sheets of paper can create an vivid metaphor for the shifting of tectonic plates, a metaphor can only create a proximal understanding ("well, it's kinda like â€¦"). The tragedy, both for earthquake planners and for book designers is that a metaphor isn't the real thing. Turning the last page of the Sourcebook may leave readers with the curious conflicting desires to experience earthquakes viscerally so they can truly understand, and the educated impulse to stay as far away as possible. In that sense, perhaps more than as a graphic design exercise, the The L.A. Earthquake Sourcebook succeeds. 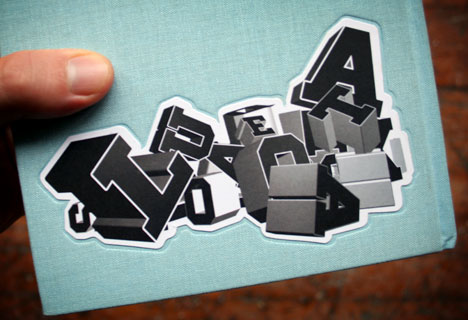