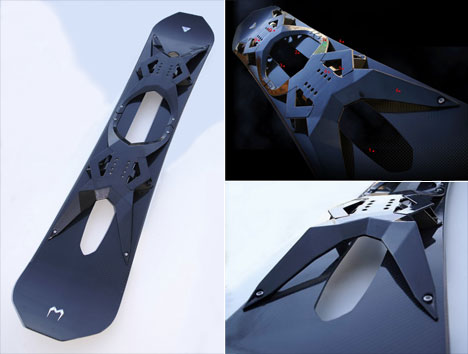 This month Cheetah Ultra Sports will begin shipping The Whip, a new type of snowboard designed to

It does all that without chatter, and without heel or toe drag. Our design makes the riding so easy, most experienced riders will actually have to relax their riding style to get greater performance out of the board. For people who have never snowboarded, our design makes it easier to learn and master.

The revolutionary design borrows elements from a hydrofoil, minimizing the area where the board makes contact with the snow in order to reduce drag (while simultaneously increasing directional stability), and a proprietary suspension system makes weight transfer easier.

The thing we most like about this product--or news of it, anyway, since we haven't ridden one--is that it was clearly designed by an enthusiast combining direct experience with a clever understanding of materials. The Whip is made from a combination of wood, plastic, steel, and carbon composite. More on The Whip here.