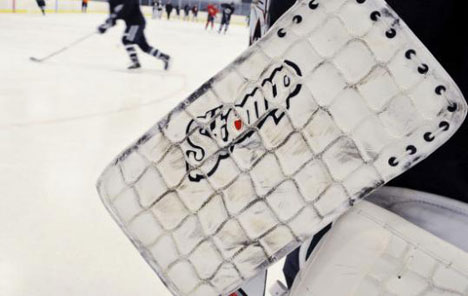 High school senior Trevor Leahy has used design to give him a slightly unsportsmanlike advantage: Combining skills he learned in a graphic design class with readings on Darwinism and camouflage, hockey goalie Leahy has developed a set of goalie pads that resemble the very net he's guarding.

"When the shooter comes down and only has a split second to shoot the puck, they're looking for net," said Leahy, a senior from Hampton, N.H., who grew up in Byfield. "If you put the net on the pad, they'll shoot at the pad instead of the goal."

So far, Leahy has logged two shutouts with the pads. In practice, two of Pingree's top scorers say, the illusion is particularly effective when there's a scramble in front of the net and they need to shoot quickly... [Opposing players] say they have fired the puck directly into Leahy's pads. The illusion diminishes if they are farther from the net, with more time to shoot.

Leahy, who had the pads custom-made by a Canadian manufacturer, has applied for a design patent.