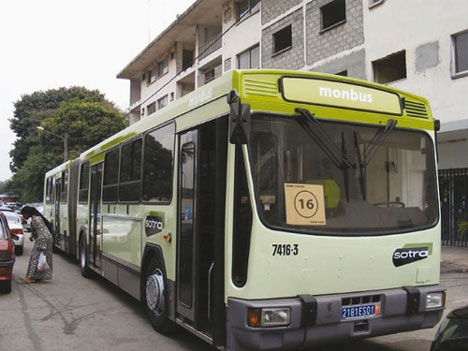 Anyone who's traveled by bus in sub-Saharan Africa is probably familiar with the curious combination of modern and ancient technology this entails. The buses, usually purchased second-hand from European or Asian manufacturers, are subjected to loads and road conditions for which they were never designed while being detached from the maintenance infrastructure for which they're intended, resulting in a lot of very spiffy, falling-apart vehicles.

The West African nation of Cote D'Ivoire (Ivory Coast) has addressed the problem by building their own. Sotra, the national transport company, has an engineering arm that has undertaken not just the manufacture of new buses domestically, but a local re-design that results in something more appropriate to the crowds and rough roads they're likely to see. Modifications include a more robust chassis, and reduced seating in urban commuter buses, enabling them to accommodate more standing passengers.

According to the BBC story, the first three hit the streets last week, and orders are already rolling in from neighboring countries, with production expected to scale up 300 units a year eventually. Especially remarkable is the fact that all of this was achieved while Ivory Coast was locked in a political crisis precipitated by a recent civil war. The can-do attitude in the article overall is pretty striking, especially the closing quote from the Sotra Industries director:

I think that we have to begin one day because it's not very difficult. We have been to school in Europe and we think that we are able today to build our own buses; there are no special difficulties.