Guest post from the Liz Kinnmark and Kegan Fisher of Design Glut.

A special sort of bonding happens between Gift Fair exhibitors. People come together when they undergo extreme circumstances such as natural disasters and trade shows. Before dismantling our booth on Thursday, we were unexpectedly sad. We were going to the miss hanging out in the booth we'd built and chatting with all our newly-made friends.

Luckily one of those new friends, Karl Zahn, came by with the mallet from his Simple Series and helped us start breaking down our booth before we could get too mushy and nostalgic about it. 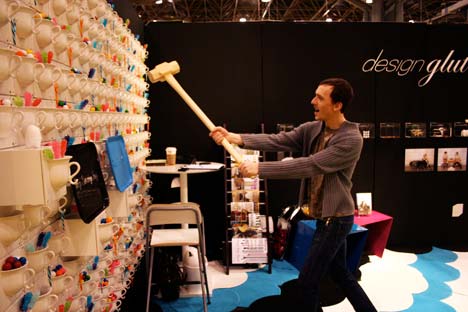 The New York International Gift Fair, or NYIGF, happens twice a year at the Javitz Center on 34th and 11th. The Javitz is a huge beast of a building which poses the question, "How could they make an entire building out of glass and have no windows?" From the inside there is no way to gauge the passage of time. The awful lighting flickers above you. You give the same spiel about your products over and over and over again. You drink too much coffee. You start to go a little nuts. 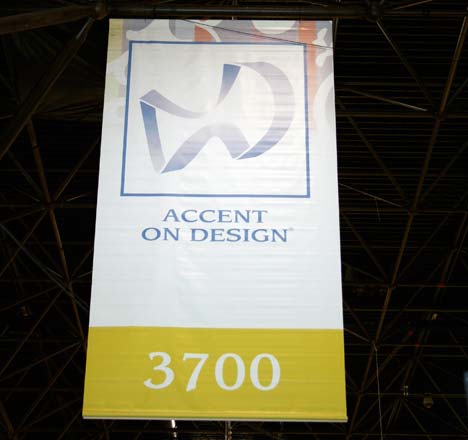 So how do you survive the Gift Fair? - The "Accent on Design" section can be distinguished from the rest of the show by its bright green carpeting and relatively low percentage of crap. Other sections such as "Handmade" and "General Garbage Gift" are to be entered at your own risk.

- Treat it like a trip into savage terrain. Bring plenty of water, granola bars and energy drinks. We recommend stocking up at the deli on the SE corner of 34th and 10th. It's your last stop for moderately-to-expensively priced food that isn't half bad. After that, all you've got is Javitz catering, which is of questionable quality and involves waiting in super-long lines.

- Area restaurants will come by your booth and dump piles of take-out menus on top of your displays. This is annoying for obvious reasons. Don't let them leave the menus. You don't want to order from them anyways; your food will arrive three hours late. (Not an exaggeration, it happened.)

- Make friends with your neighbors. Our neighborhood was the 3700 row. During setup, we saw that just across the "street" was a chocolate company. How could we be so lucky? Let me tell you, Kshocolat makes very yummy chocolate. 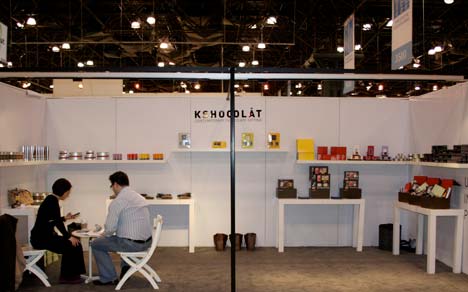 We were also lucky to have awesome next-door neighbors. Lovegrove & Repucci, in addition to designing really cool products, paid the $100 to have electricity in their booth. We didn't. Not because it's a rip-off (which it is), but because we didn't understand that's how it worked. Oops. Nick and Demian were nice enough to charge our cell-phones for us, and in exchange we blog about them. their stuff. 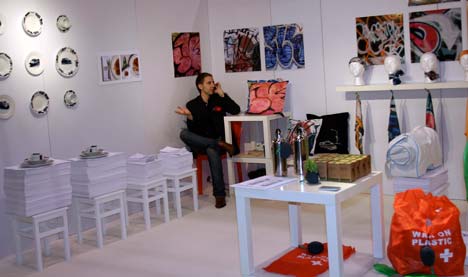 Gossip travels like a game of telephone from booth to booth. And when a show-goer does something particularly terrible like rip your display off the wall, at least you've got your neighbors to complain to. (Yes, that happened to us.) A cluster of booths quickly becomes a community. Bholu and Patch NYC rounded out our little 'hood. 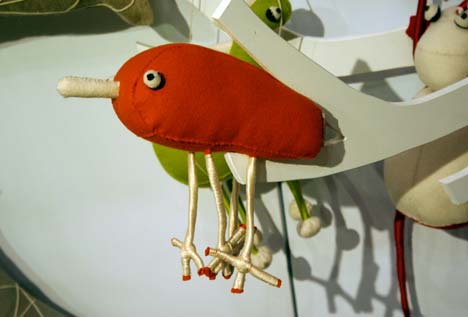 We are now the proud owners of Ignatius the Critter from Bholu. 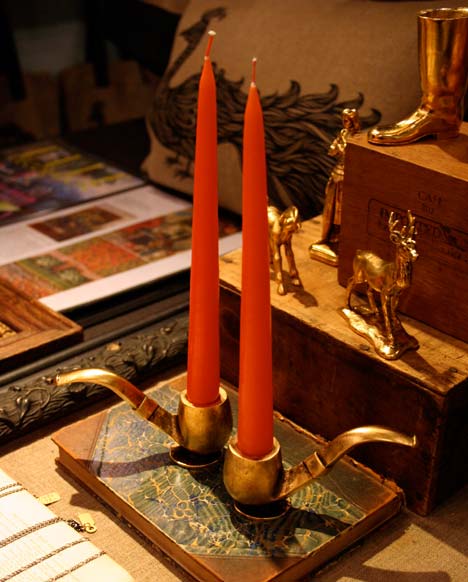 I took a trip over to some other sections of the fair in order to document how terrible it was. To be honest, I ended up being surprised this year. A lot of it wasn't that bad. So much for getting to rag on ugly stuff. However, there were two gems which I actually found offensive: 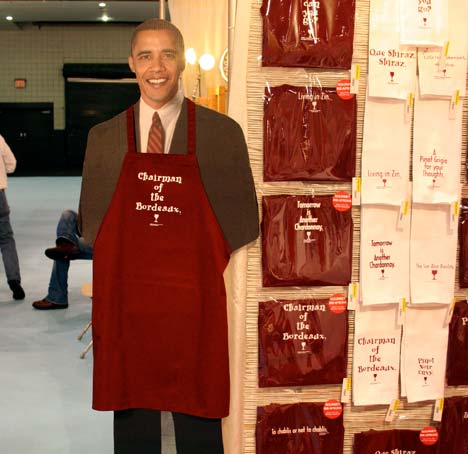 Wow, that life-size cardboard cutout of Obama really does make me want to buy your aprons. 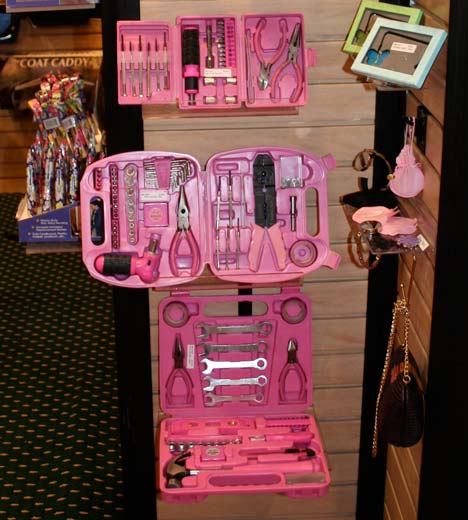 This is not OK.

Ending on a positive note, here's a roundup of my favorite things at the fair: 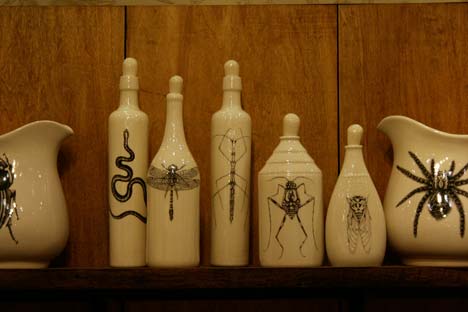 Apothecary bottles from Laura Zindel. (I got and love the one in the middle with the walking stick on it.) 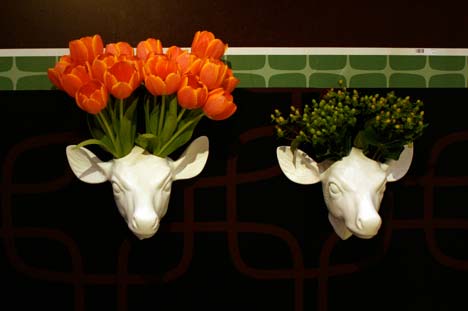 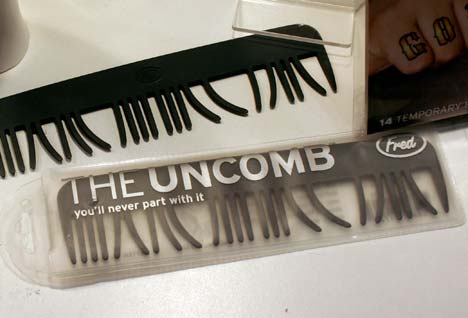 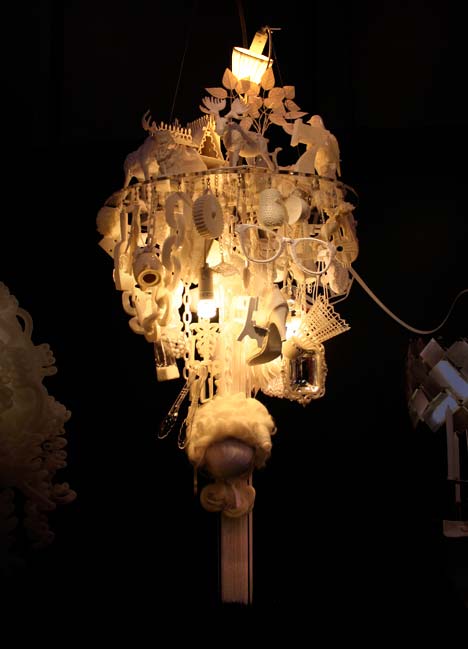 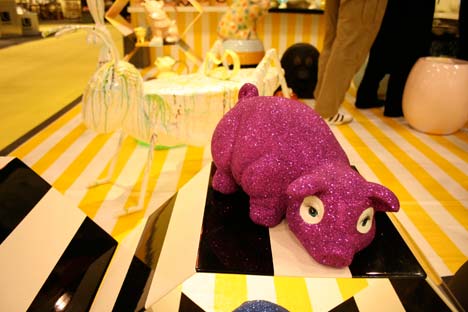 Our last words of advice would be to invest in a high-quality cordless drill and extra battery/batteries. During breakdown, we managed to go through our drill's battery, Areaware's drill's battery, and at least half of D.L. & Co's drill's battery. (We traded them chocolate that the lovely people at Kshocolat left us with.)

The next Gift Fair happens in August. If you think you're brave enough to handle it, come out and partake in the spectacle.