Interaction 09: Behavior as the medium, and the search for IxD rockstars. 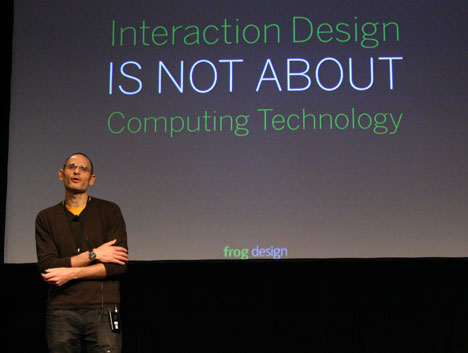 A pair of keynotes framed Saturday's sessions here in Vancouver, both calls to action to the IxD community, but in very distinct ways.

Robert Fabricant of Frog Design led off, with a surprisingly object-focused discussion of human behavior and the capabilities interaction design has for changing it. Such influence has of course been wielded for thousands of years -- the talk began with a brief history of the discipline (broadly defined), from hieroglyphics to family trees and onto the modern internet, noting how each of these has changed not only our relationship with information, but some of our ideas about what constitutes proper behavior. Hence his fundamental thesis, "Interaction Design is not about computing technology, it's about behavior," and later on "Behavior = our medium."Project Masiluleke, profiled here on Core77 last year, has been a major passion of Fabricant's since Frog started work on it in 2007. A largely mobile phone-based collaboration with Nokia and several South African telecom companies, the project aims at disseminating information about AIDS and HIV in South Africa, and ultimately at increasing testing and treatment rates in what has become the most heavily infected nation on earth.

While it's easy to nod in an fuzzy way along with a presentation claiming we have a duty to influence behavior for the better, 10 minutes of details on the project begin to snap the true potential of this sort of design into focus. Research indicated that South African men were extremely wary of requesting information or getting tested out of social stigma; so every aspect of the project sought to add privacy and individual control to these events. The latest results? A prototype home-test kit, specific to the South African market, was unveiled for testing with an at-risk population: 8 men were recruited, 24 showed up, so excited were they by the opportunity. That's appropriate interaction design.

With the Greener Gadgets conference rapidly approaching, we at Core were also well pleased to see a number of projects from the latest competition thrown onto the screen, as more positive examples of design as a behavior-changing act.

Dan Saffer's talk dwelled more in the abstract, but drew roaring applause half a dozen times for crystallizing a few thoughts that have been coalescing in the collective consciousness of the IxD field for a while now. Namely, that the interaction designers should focus less on defining what they do; that simplicity has been over-emphasized to the point of fetish; that aesthetics do matter; and that IxD needs some rockstar designers of its own. How the yearning for rockstars jives with a reluctance to define the field has been the subject of some debate ever since, but more on that later.

Interaction 09: Behavior as the medium, and the search for IxD rockstars.