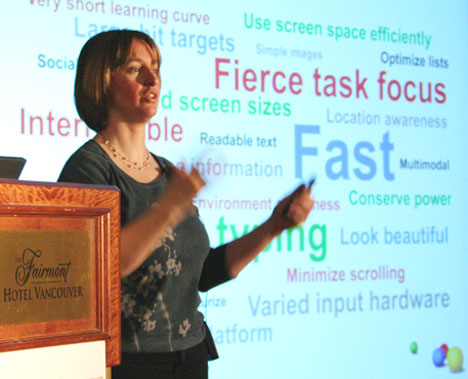 One of the more exciting manifestations of Interaction09's variable-length schedule this year was the inclusion of "Lightning Rounds" - 20 minute sessions led by working IxD professionals on some of the finer points of their trade. By running these sessions concurrently in four different rooms, conference planners give attendees the ability to customize the professional development aspect to their own personal needs -- a nice counterpoint to the more general, call-to-action tone of the several longer keynote talks, and for many participants, a chance to hear a minor rock star of the discipline speak in person for the first time.

For the visiting blogger, the sessions are both a joy and a pain in the ass, offering some fascinating diversity, and a certainty that another even better session is going on, and you're missing it. They also present a more finely detailed glimpse into the ongoing attempt being made by the IxD community to define its core competencies; here's a sampling from the 28 rounds (9 of which we actually got to see in some part):

-Jennifer Tidwell (above), an Interaction Designer at Google, presented a rapid, focused list of directives for good interface design for mobile device touchscreens. Standout suggestions: infinite lists, minimal headers (to avoid the "layer cake effect" of all header and no content), aggressive autocompletion ("because typing on a touchscreen pretty much always sucks"), and Share buttons everywhere ("mobile device use is inherently social"). Also, a commonly voiced concern: "What I worry about is the ghettoization of mobile design practices. We're all going to be mobile designers soon enough. If you're a web designer, chances aren't bad you're already doing it."

-Visual Complexity, led by Manuel Lima, the Parsons professor who founded and still runs the website of the same name. As visualization of massively interconnected networks become more commonplace, a standardized set of charts is getting established -- a sort of Complexity equivalent to the Bar, Pie and Scatter charts of old -- but utilizing time and zoom capabilities to show more information in less space. Check the site for more. 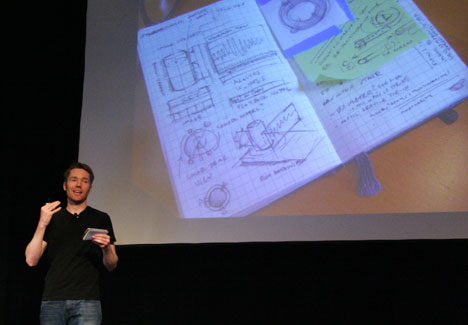 -Sketchbook Techniques for Interaction Designers -- and this means sketching in the same sense that ID folks understand it: with pen and paper, as a means of exploring concepts. 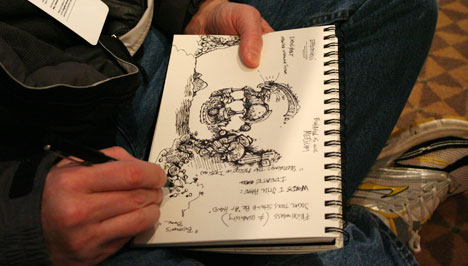 -Toward a Foundation in IxD Education -- presented by SCAD professor and Core77 contributor Dave Malouf, this examined the Foundation of 3D Design system in Industrial Design education as espoused by the Pratt Institute, and sketched out a possible equivalent for IxD, which currently lacks one. Line, Plane, Volume, Texture and Color are supplanted by Time, Abstraction, Metaphor, Negativity, Motion, and perhaps Behavior, and wraps with the statement "Unlike ID, there are not enough leaders currently with mastery of IxD primitives."

-A group discussion on Weathering the Current Economic Climate -- The consensus seems to be that companies are still hiring designers, but expecting them to do more, and often favoring the sole employee or freelancer to the IxD consultancy. The increased wearing of multiple hats is a theme we've seen in other creative disciplines as well.

-Designing for Touch -- Led by Joe Fletcher, User Experience Manager at Microsoft Surface. Fascinating, highly specific discussion of the opportunities and limitations of touch interface. "Tap is not the new click," remarks Joe, suggesting that in the hype surrounding touchscreens, we've become blinded to the superior appropriateness of stylus, keyboard and mouse interfaces for many tasks. Also, the Minority Report interface is really really tiring. 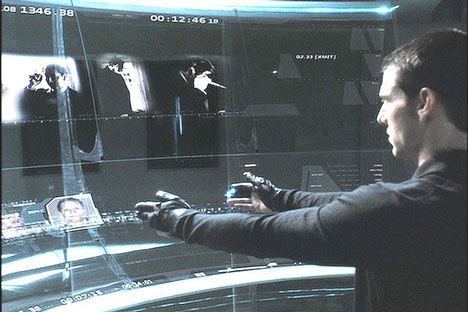 The complete schedule of the conference is here -- schizophrenic, or simply broad?