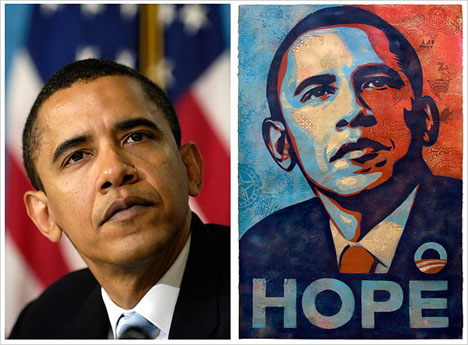 AP photographer Mannie Garcia takes a photo of Obama on the campaign trail. Artist Shepard Fairey turns the image into a poster, and gets the pants sued off of him by AP. Then Garcia says he has the rights to the image, not AP, but that he's happy the photo was turned into the poster.

Ohmygod so like, I talked to Helen in gym, and like she totally said that Tony was staring at her in Biology. But I told her there's no way that could be true, 'cause like Tony totally knows Neil is into Helen, and Tony and Neil are friends, and Sandra sits behind Helen and I think Tony was just staring at Sandra!

Writes Steven Heller (of the Daily Heller) on the Garcia/Fairey/AP thing:

...I do want to point out that this is not the first time photographs (and other artworks) have been the raw material for graphic works. In fact, the already murky area called "fair use," which Fairey's lawyers are invoking, has been applied before. [Here] are a few that have passed that very test. (Che by Alberto Korda and Paul Davis; Nixon official photo and Andy Warhol; Mao official portrait and Andy Warhol; News photo of Sacco and Vanzetti and Ben Shahn; Michelangelo's Isaiah and Norman Rockwell's Rosie the Riveter.)