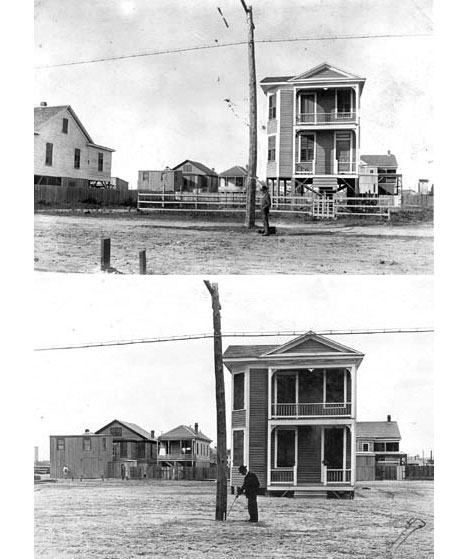 Here in 2009, we're still victims to hurricanes and resultant flooding just like we were back in the year 1900. But it's fascinating to see the solution devised by residents of Galveston, Texas after their town was devastated by a hurricane 109 years ago:

In her amazing book Against the Tide: The Battle for America's Beaches, Cornelia Dean recounts all too briefly what Galvestonians did to their city after the great hurricane of 1900 killed nearly 6,000 people and devastated what was then considered "the center of commerce for the entire Southwest."

Rather than retreating from the shifting sands to points higher elsewhere, the city instead decided to fence itself off from future disasters with a seawall; raised everything inside--houses, churches, offices, trees, gardens--by as much as 17 feet; and then flooded the revealed negative stratum with silt.

It was a "plan that even in an era of engineering daring stood out for its size, cost, and audacity."

Up top are before-and-after pictures of a raised house. The man in the photo is pointing to the same line marked on a telephone pole, showing that the level of the earth has been raised considerably.

Perhaps the most impressive building that they raised--and bear in mind, this is using technology devised in the 19th Century, as the 20th had just begun--was the 300-ton St. Patrick's Church. 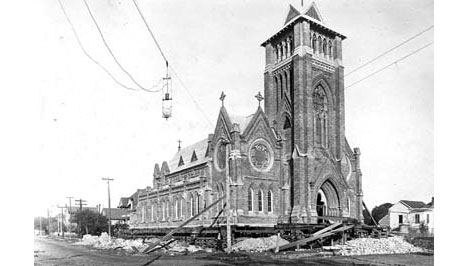