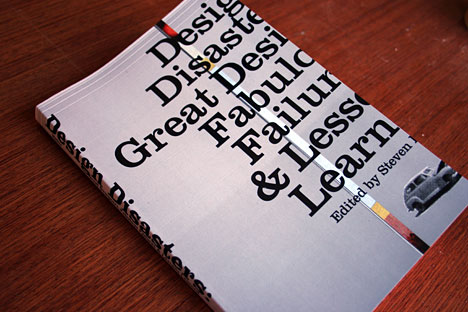 The wild cover design of Design Disasters: Great Designers, Fabulous Failures, and Lessons Learned forced me look to the back of the book to get the precise wording of the title, commas and all. Perhaps that's what cover designer James Victore intended when he spilled half the title off of the front page and presented such an obfuscated grid on the back cover that I had to run down the page with a ruler to try to locate the baselines. Ultimately I found the title written in its full Library of Congress form upside down and aligned with a nested set of bullet points for the contributor credits on the back cover. While I've never been a fan of guessing author or artist motive, the overall effect amounts to making a pleasing harmony out of a relative mess, which actually fits the book's themes pretty well.

Design Disasters collects stories of failure (along with the titular lessons learned) from luminaries such as Stefan Sagmiester, thinkers like Ralph Caplan and Henry Petroski and Core's own Allan Chochinov. Perhaps Steven Heller explains the logic behind the cover in his introduction, which states, "If I were the joking sort, I would just make the type from here on unreadable as an example of failed design." I'm glad he didn't because such an omission would have denied the reader the opportunity to hear the stories contained within. Heller himself describes the creative process with a special emphasis on success through failure. It's an old lesson, but in this age, when design presentations can be changed with a few twitches of the wrist at the mouse, there's no reason why every finished design can't be built from a cornucopia of failures, so much so that perhaps the very nomenclature of failure needs to be reconsidered. Perhaps we designers have already subliminally assimilated this lesson. After all, most people I know don't call it failure, we call it process. For me, success and failure are the same things, just on a different timeline. 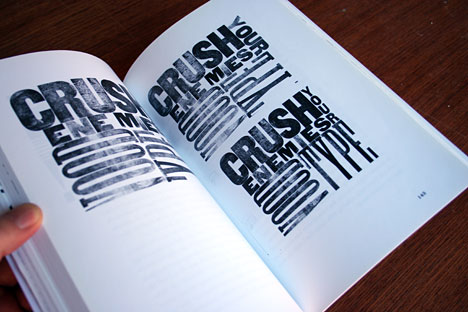 The format used by Heller seems to be in vogue now: pose a question to a range of experts in the field and publish the results. Debbie Millman's How to Think Like a Great Graphic Designer collected the wit and wisdom of graphic designers at the apogees of their career while Heller purports to do the opposite by talking about their failures, which winds up being tantamount to the same thing. That said, there's something comforting (schadenfreude?) in hearing Robert Grossman talk about his failure as a comic book artist or looking at Stefan Sagmiester's video game box art which he courageously describes as "the remarkably pure piece of shit you see attached." It's simply comforting to us that even the icons are, well, human. But the real gems in the collection are slightly more surprising. Ken Garland takes the reader on a tour through two hundred years of graphic design with a more European flair than most American's are used to, complete with the apparent failures and long term successes of a variety of mavericks who left lasting impacts on their fields but were largely unrecognized in their times. Peter Blegvard's essay "Memory Failure and Imagination," journeys inward instead of through the past as he uses that remarkably unreliable mechanism called memory to demonstrate quite clearly how failures and missteps can lead to insight and beauty. Playing a game similar to the verbal copying game called "telephone," he attempts to draw from memory pictures of lions over months and then years. While I can't do justice to the drawings reproduced in the book, or to the process by which he converts the drawings of the lion into an image of flaming underpants (it must be seen to be believed), I can pronounce several of his "failed" drawings of lions among the most successful iconographic felines I've ever seen.

Richard Saul Wurman presents among the most literal answers to the question, invoking the failure of the Tacoma Narrows Bridge described in detail in Henry Petroski's Success Through Failure, along with less literal witticisms like Ashleigh Brilliant's "My play was a complete success. The audience was a failure." Petroski himself contributes as well and does an admirable job of distilling his whole book into just over three pages, placing the metaphor firmly in the human world by observing that failed technology tends to be the driver for new innovation. 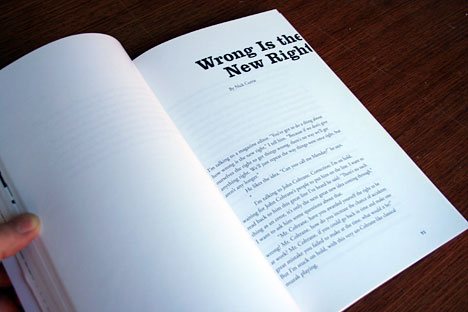 While I enjoyed reading Design Disasters quite a bit, I must confess I feel as though I may be short changing readers with this review, and perhaps that stems partly from the structure of the book, which is brimming with ideas focused around a central question, but ultimately leaves readers without an actionable agenda. It is no coincidence that Petroski's name appears so frequently. There's no question that he's the expert in the field, but perhaps like in all things, many iterations are needed before a lesson is truly learned. Allan Chochinov's essay early in the book riffs on that theme by working through many possible descriptions of "failure," before finally reaching the same place he began, albeit with insights gained along the way. So perhaps that's a suitable place to end as well. In part because Petroski's work stems from engineering, it can leave the reader feeling as though it seeks some sort of platonic ideal that won't fail after enough revisions are made, while Design Disasters seems to embrace not only the end result but even the failures themselves.