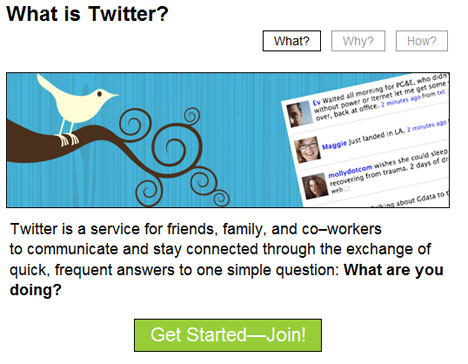 It's an interesting time for Twitter. Although the folks on Twitter are lead user/early adopter types, there is huge buzz about the service. And as with many disruptive innovations, this new-and-different-thing is not well understood and begins to evoke a backlash. The mainstream media (NYT, Daily Show) is enjoying the opportunity to portray the technology - and its adherents - as contributing to a social decline, wasting time, being foolish, self-absorbed, and other cultural sins. But we went through this with cellphones (self-important rich people only), the Walkman (self-absorbed anti-social jerks), and so on. Let's understand the backlash for what it is: a society grappling with emerging behaviors that challenge social norms. See Evan Williams on Charlie Rose for a discussion of "normal people" using the service.

One way to normalize a new behavior is to think about how it's going to make money. Because what's more normal than capitalism, right? So we've got all the Skittles buzz this week. We'd rather consider the designed experience that Twitter is facilitating than the marketing, PR, and money stuff, though. For a primer, you can read our previous thoughts here (summary: What the heck is this thing for? You've gotta use it for a while and see). Of course, all ideas are brainstorming, and not recommendations. Brainstorming works best when people build on the ideas, so we'd love to see all the builds you can come up with on the issues and the stand-in solutions. Note: some of these things may already be available on Twitter.com; but we see them only when we log out, so not sure how much help that is?!Out of Box or Is This Thing On? Just for fun, we went and looked at some of the first tweets (or postings, if you prefer) from people we are connected with on Twitter. Here's some typical ones

(side note: there's a lot more exploration of what people's first tweets are; see this analysis and this part of the My First Tweets project).

There's nothing wrong with this sort of tweeting, it's a way for people to explore and test the system out. But it reveals that tentative stage people are in (and some never leave) when first using the system. A general principle here is to give people scaffolding to help them move to a more comfortable, fluid, confident, and rewarding stage of usage. Twitter asks What are you doing? and people can answer that question. But without a more full-fledged model of Twitter, they are always going to be tentative in this stage.

One possibility: give people a backstage mode where they can just try posting stuff, and then once they are ready, turn them "live." Maybe you get 10 free tweets that no one will see. I'm thinking of Practice Mode in Guitar Hero where the player strums and the disembodied voice urges "great!" "rock on!" "go for it!" Give people permission to play without an audience, and then go live with it.

What Goes Where Maybe it'd be helpful to provide a diagram that visually explains what you are broadcasting and to whom. What do you see as input on Twitter? Where does what you write go? Who can see it? And sure, if your stuff goes on the public timeline, then "everyone" can see it, but if Twitter is getting (say) 5,000 posts a second, that may change how you feel about your content being put all the way out there. But building that model in a realistic way for people so they understand how public they are being.

The Device Ecocystem There's two use cases here (for most of these issues): posting and reading, and you can configure your devices/technologies a few different ways. There's a cliche of Twitter as a mobile device-only system, but it's much more flexible than that. You can use IM, SMS, or PC and a combination or multiplicity. That creates a lot of options and customization, but people need a bit of help understanding what the options are, and perhaps why those options would be better for one situation than another (rather than realizing how much it sucks to get 30 texts in 4 minutes).

The External App Ecosystem We could imagine why Twitter would not want to get involved in telling people about these things, but since they've opened up their API there are a ton of other services and applications out there. Designers of these tools are building in the viral aspect so that using this extra service (say, MrTweet which suggests new followers for you) creates a tweet that tells others about the fact that you are using it). But how does a not-so-new user find out what else is available? Sorting through the iPhone apps and desktop apps that let you manage your tweets and followers differently is not an easy task. And no doubt there are websites out there that have captured all that, but why not put it on Twitter.com?

Terminology and Commands We've learned most of this by watching other people. But it took a lot of Twitter use before we were clear about conventions such as @ to reply to another person (and to understand what that looked like to the recipient), D to directly and private contact another person, # for tagging, and RT for ReTweeting (we still aren't sure if that's an evolved bit of common language or a command that we can use somehow). Can we help people with this? Sure, help text on the screen, but also some sort of smart tech, like Google's suggestions during search, or (God forbid) a Clippy-like solution that offers some suggestions based on what it thinks you are trying to do.

What To Use It For Twitter might not want to go too far with this either. People are inventing all sorts of new use for Twitter all the time. But highlighting some use cases would be interesting and eye-opening for people as they either are thinking about putting their toe in, or after they are users and considering what the heck this thing is really for. Although it's rather smarmily self-congratulatory, the LinkedIn Blog does this fairly well.

I'm sure we've missed a ton of ideas. What do you think?