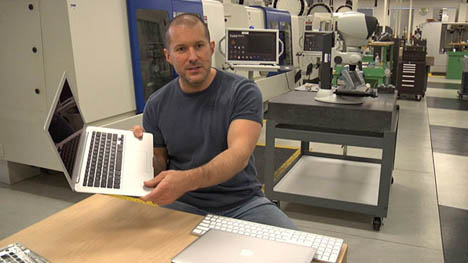 Last Wednesday night in New York City, I attended what Gary told us was "the first screening of Objectified in front of real, live people." The room was filled with fans, contributors, well-wishers, and a few designers from the film, and though its official release was at a (packed) SXSW premier in Austin this past weekend (Core77's Stu Constantine moderated a panel with Hustwit and 3 stars of the film on Sunday), it was great to get a sneak peek at the thing and have a few days to put some thoughts together. This was a challenging review to write; it was too dark in the theater to take notes (or capture great quotes, though there's a nice set here), and as Marc Alt remarked on the sidewalk afterwards, it is hard for a designer-type to be, well, objective about Objectified.

The movie started out with the obligatory "everything in our lives is designed" segment—an argument as well worn by designers as it is revelatory to non-designers. This set-up was nicely handled though, and made me think of the "Plastic is in almost everything around us" version in Ian Connacher's film Addicted to Plastic. (A less disciplined movie overall, but quite a bit harder-hitting.) Once we're past the intro though, Objectified's themes start to emerge—or theme, actually, since almost the entire movie devotes itself to exploring the intimate relationship between objects and the people who make them. Well, and the people who own them, ultimately.

Objectified is a very affectionate film—toward its cast, its subject, and indeed the entire enterprise of design. It's not a sociological study, but, as in Hustwit's previous blockbuster, the movie surfaces its arguments through the eyes (and mouths) of famous designers and critics. Helvetica-style, we watch everyone from Jonathan Ive to Hella Jongerius discuss their unique brand, their point of view (and points of departure)—personalities blazing and hearts on sleeves.

Ive comes early in the film (to everyone's relief—don't make us wait for Jonny!) and if not pulling the Wizard of Oz curtain exactly, goes a long way to demystifying himself with a longish riff and charming punchline on the now-famous uni-body aluminum construction of the new Apple laptops. Industrial designers will adore this segment, and it's kinda daring of Hustwit to leave it all in. Setting up what comes up as a recurring touchpoint in the movie, Ive evidences an intense relationship with his objects, and this commitment—"obsession" is the word he uses—comes through in all its anodized glory. 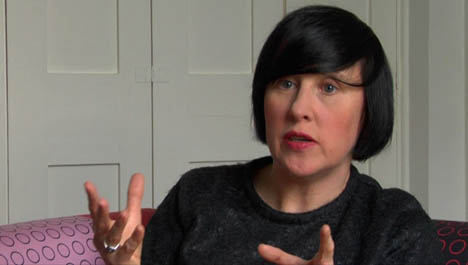 Hustwit has said that the key to interviewing people is "not to ever interview them," and, like Errol Morris, he's pretty damn good at (not) doing it. Nobody hangs themselves here, but they're presumably given a ton of rope with which to construct bridges between disparate ideas, wrap up gifts, or tie Gordian knots. There are great moments of candor, just enough guard-down remarks to add some seasoning, and, as in Helvetica, the results are fun, fun, fun. We get the cerebral Andrew Blauvelt and the soulful Naoto Fukasawa; The passionate Paola Antonelli with the zen-calm Jane Fulton Suri. Karim shows great restraint—just one neologism, and some good provocations—and the Bouroullecs get caught with a good-natured jibe at Marc Newson (CUT TO NEWSON!). Alice Rawsthorn, ever articulate and insightful, becomes instrumental in moving the subject/object around, and we come to depend on her for setting our priorities straight, especially when she talks about the new imperatives of design (more on that in a bit). 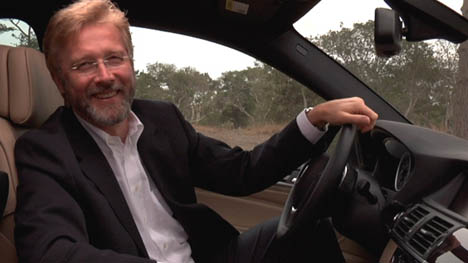 Certainly (and I'm happy to be the first of many likely to say this), Rob Walker is "the Michael Bierut of Objectified," stealing the show with each of his segments, nimble with language and ruthless (in a good way) with insights. Fans of Chris Bangle will not be disappointed either: the guy is absolutely hysterical, and after his first appearance, you are thrilled every next time he hits the screen. (Oh yay! More Chris Bangle!) The forever-adorable Fiona Raby and Anthony Dunne kick some discursive ass around, with video treats of their now-famous Technological Dreams Series. Like I said, fun.

Perhaps the big winner in the film is Dieter Rams, already a god in design circles and sure to fortify that shrine after this film's release. He has some of the best lines ("Good design is as little design as possible"), but comes out triumphant on the sustainability front. Bill McDonough, watch your back. 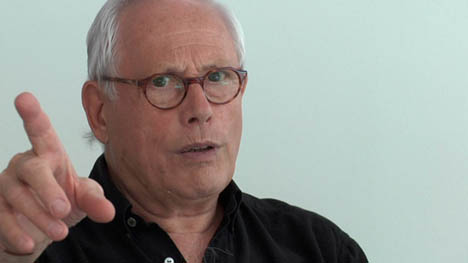 Two larger consultancies make appearances in the film, with some wonderful footage of staff designers and facilitators in action. You can guess these, of course: Smart Design, hosted by Dan Formosa and Davin Stowell, dumps out binfuls of Good Grips handles, and IDEO sticks up padfuls of Post-Its. These are the clichés-turned-tropes of design lore right now, but this charge of over-exposure isn't exactly fair, of course. It would be a revelation to any normal person watching the film that so many versions of the Good grip were modeled, prototyped and tested, and likewise an inspiration to see that people, bandoliered with only bullet-point Sharpies and a stack of sticky notes, can be capable of broad design thinking. Tim Brown soon ups the ante, introducing service design and their triumphant "Keep the Change" work for Bank of America, and we never tire of listening to David Kelly's wisdom or Bill Moggridge's voice (he's got a bonus magic trick in the movie, btw). Here, it was nice to see the conversation start to gesture toward some of the more intriguing topics in product design right now—transmaterialization, product-service pairings, sustainability—'cause here I was getting a little bit nervous. 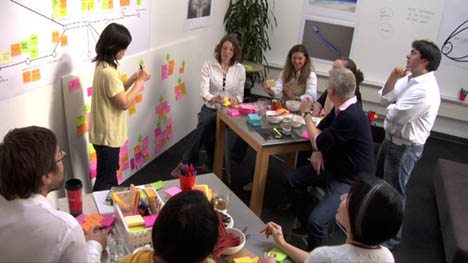 At around the three-quarter mark in the film I started to squirm in my seat. The movie's exploration of the relationship between human and object was all very interesting, but I started to wonder, Is this film going to be critical at all? And wouldn't you know it, the very next scene cut to footage of e-waste processing centers, with CRT housings being disassembled, parts crashing, tumbling into massive steel bins, and (finally) some mention of what the impacts of all these objects that these venerated designers dream up might be. (Funny that I was relieved to see the dark side rearing its head! Like in all good narratives, no conflict no story.) Again, some good commentary by Rawsthorn, and then some follow up at IDEO, but I couldn't help feeling that this essential part of the story of stuff was getting severely, almost negligently, shortchanged. I've been banging the "designers aren't in the artifact business, they're in the consequence business" drum for a long time now, so I wanted Gary to hold this foot closer to the fire.

Hmm. Perhaps a movie probably shouldn't be judged on what it isn't, but rather what it is, and if the mission of this movie was to articulate the relationship between maker, made, and user (albeit highly focused on the birthing stages), then it was a success, revealing the quirks, personalities, studio spaces (the best part!), and motivations of its stars. But should we trouble with the question, Who is this movie for? Was Helvetica for graphic designers? Well, in some respects it was; paying homage to a trade and a legacy, its threads wove up into something that was a hymn for the choir, but arguably compelling to just about anyone. I'd venture that the audience for Objectified is most certainly wider than the relatively small population of product designers and their fans, so the question becomes, Did this film illuminate the world of product design? Sure, of course it did. And deftly too.

But here's the most important part. In the end, the viewer is likely to leave this film having been sensitized to what is perhaps its strongest invocation (and something I am forever yelling at my design students about): the notion of intention. Sure, you learn about the designers' dreams and desires, their motivations and peculiarities. But at the end of the day, this film is a testament to how damn intentional all of these people are. Which rhymes perfectly with the set-up at the start of the film: Everything IS designed, which, the viewer learns over these 76 minutes, is the whole point of it. Design and intention become synonymous—not a bad definition at all—and one that designers and non-designers would do well to understand.

There's something else that circles you back through those 76 minutes though, and it's not unproblematic. Near the end of the film, Rob Walker's drops the proverbial "what are you going to grab when the hurricane is coming," damning all of these amazing forms and form-makers we've come to be acquainted with...well, not quite refuting the entire previous hour-and-a-half of narrative, but certainly forcing us to question all the conceits, all that mastery, craftery, indeed all that intentionality we've so seductively been learning about. What follows is a montage of the crappiest, "not-designed" bric-a-brac and ephemera, beloved and cherished not because of its carefully articulated forms or ergonomics, but for quotidien characteristics more akin to sentiment, charm, humor, and wear. We recognize analogs in our own lives, in our own homes, as these objects flash past, and are tempted to reach what I wonder might be an inescapable conclusion: designers may be talented and deliberate about what they do, but true meaning comes from the experiences we imbue those objects with. But you already knew that. Perhaps the best the Objectified designers can hope for (and a few are explicit about this in the film) is that their objects are around long enough to earn their grab-and-go keep.

It may be appropriate to close with bookends here (they're designed too!), and the movie's got two good ones. The start of the movie begins with a trick (guess-able, but dead-on), and ends with another (humble, and perfect), which wraps things up with the sweetest gracenote I can think of.

So those are my impressions from a first viewing. Most product designs never see the light of day, so one wonders what ended up on the cutting room floor...okay, "like so many discarded prototypes." But what remains is a tribute to the profession, one that ennobles as it reveals. Design really is everywhere, and one of my best collisions with it was visiting Smart Design in their old digs almost 20 years ago. Going to the bathroom, I was delighted to see a hack I should have been clever enough to presage: The handle on the toilet was covered, you guessed it, by a Good Grip. Intentional indeed.