With a gentle crescendo and swift pitch shift, Brandi House uses her voice to beckon the "Voicebot" (a sound-controlled Lynx 6 robot arm) towards her before coaxing it to move near a block that she wants it to grab. An abrupt "ch" sound then makes the arm's gripper open so it can handle the object. The Voicebot is a vocal controlled robot arm that uses non-verbal vocalization for enabling interaction. Singing allows for continuous control in the manipulation of real world objects, and the project, which has been ongoing at the Electrical Engineering Department at the University of Washington, is geared towards the development of systems that will allow people with motor impairments to control automated devices such as robots and prosthetic limbs.

Now you can download an alpha version of the Voicebot yourself (Windows only), so if you happen to have a Lynx 6 robot arm around (or care to pick one up), start practicing your lullabyes. 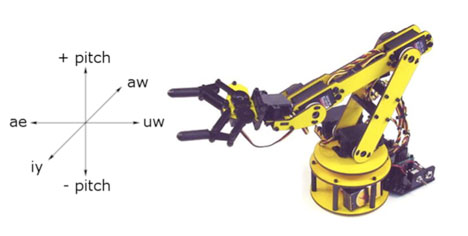 VoiceBot: A Voice Controlled Robot Arm as presented at CHI2009