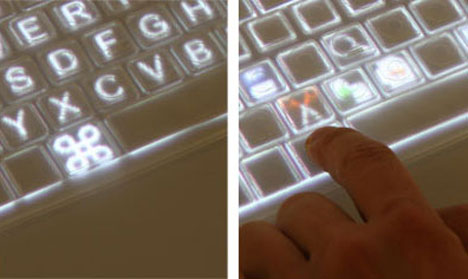 Dynamic relabeling of the SLAP keyboard

Ever since multi touch technology made its way into our lives through public displays and handheld devices, we have been in a state of infatuation with virtual controls. We pinch photos, flick menus, and spin maps around a virtual globe with ease. As seductive as these experiences are, there are still times when the tactile feedback and accuracy of physical objects are still preferable, and researchers at RWTH Aachen University in Germany in conjunction with UC San Diego have created the Silicone Illuminated Active Peripherals, or "SLAP Widgets" system to try to get a better handle on it.

SLAP Widgets are real live plastic and silicone objects that are used in conjunction with a multi-touch table to allow users to control interface values through physical push buttons, sliders, knobs, keypads and keyboards. When a widget is placed atop the surface projection, a camera can read markers located underneath it in order to identify and locate where it is. The system then projects a contextually appropriate virtual control (such as a color-coded button, slider, dial locations or querty keyboard) onto the surface, and the clear plastic widget comes to life with the bright, animated forms that appear illuminated on the screen underneath it. The user can then manipulate movable parts, such as moving the slider knob or spinning the dial, and the display responds to user input in real time. In other words, when text input is needed, a keyboard can be placed on the surface in order to invoke a keyboard display underneath it. Markers can be read as keystrokes are pressed, and the user gets the benefit or dynamic, contextual input along with the tangible feedback of pressing real, physical keys. 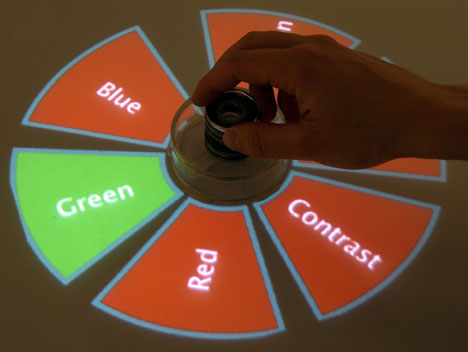 In a recent CHI2009 presentation, Malte Weiss of the Media Computing Group at RWTH Aachen University demonstrated the system, explaining that certain tasks that require precision, such as locating a specific frame in a video, are better handled through physical input devices than through virtual ones. The system, which includes off the shelf components such as an iSkin silicone keyboard protector, as well as custom made widgets such as the dials and sliders, is currently under development. 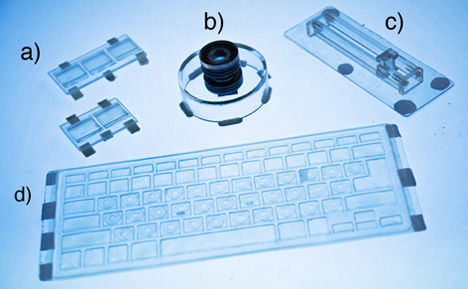 More information about the project, including a video of the system can be found at the RWTH Aachen University Media Computing Group website: http://hci.rwth-aachen.de/slap