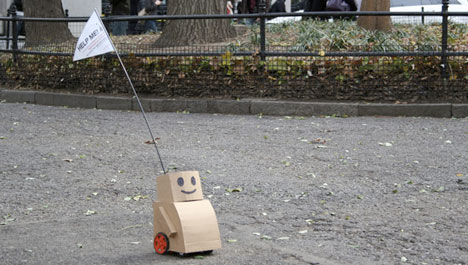 The "Tweenbots" project created by Kacie Kinzer of NYU's ITP program centers around cute, little cardboard robots sporting flags that display "Help me!" messages. They're not exactly the smartest robots in the world (they simply roll at a set speed in a straight line) but in a recent trial run through New York City streets they proved successful at social engineering: people inevitably intervened and pointed them in the right direction. From the tweenbots website: The results were unexpected. Over the course of the following months, throughout numerous missions, the Tweenbots were successful in rolling from their start point to their far-away destination assisted only by strangers. Every time the robot got caught under a park bench, ground futilely against a curb, or became trapped in a pothole, some passerby would always rescue it and send it toward its goal. Never once was a Tweenbot lost or damaged. Often, people would ignore the instructions to aim the Tweenbot in the "right" direction, if that direction meant sending the robot into a perilous situation. One man turned the robot back in the direction from which it had just come, saying out loud to the Tweenbot, "You can't go that way, it's toward the road." 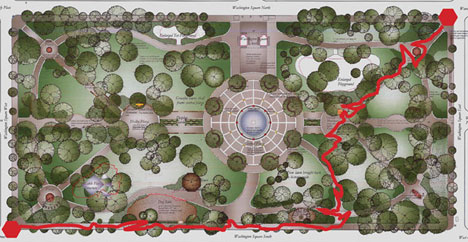