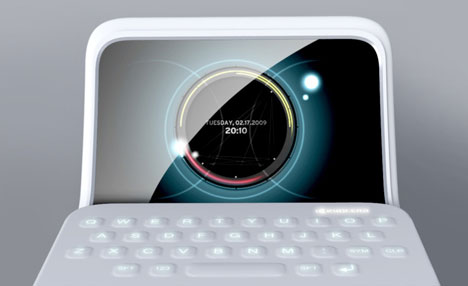 We've managed to get our hands on more shots of Kyocera's "future concept devices," the EOS and NXT. Hit the jump to check 'em out and read descriptions of the devices' planned functions.

These devices were envisioned around the idea of â€œflexibleâ€ lifestyles and use various future driven technologies. These are concept devices that allow and enhance overall mobile experiences by way of designs that embody overall simplicity and functional usability. The concept Eos envisions a future where we have a more humanistic relationship with our phones. Appealing to our haptic senses, a soft, semi-rigid polymer skin surrounds a flexible OLED display. The metaphor of a â€œlivingâ€ skin was used for its notions of protection and constant evolution; providing a heightened user experience. Shape memory allows keys to morph up from its surface when needed and fade away when not in use. The flexibility of the screen allows for greater adaptability of form and interaction â€“ it maintains a compact shape (the size of a small wallet) for simple phone calls, and unfolds to reveal a large widescreen display. The device feeds off of our physical interaction with it, translating kinetic energy into an electric charge via an array of nano-scale piezoelectric generators. The more we interact with Eos, the more energy it creates - without using batteries.

The concept NXT sheds the boundaries of traditional device designs, featuring four detachable, foldable OLED displays that communicate wirelessly with its base. The four touch-screen displays may be used together as a large screen for a striking display of dynamic content or they can each feature different applications for on-the-go multitasking. The deviceâ€™s rear housing is imprinted with solar cells, providing an alternate charging mechanism. NXT is also an orientation free phone and with built-in accelerometer the phone provides an enriched interactive experience especially while gaming.