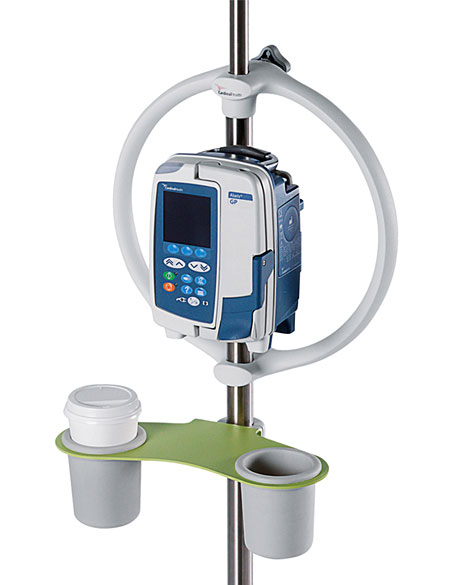 Searching for Design Opportunities Every research project is a journey. This one started in Basingstoke, England, a small city 50 miles southwest of London in a hospital run by the National Health Service. I was there for Modo to think about IV poles—an ordinary piece of healthcare furniture. Modo researches, designs and builds carts and trolleys for medical devices and customers like Herman Miller, Steelcase and Philips. This project was for Cardinal Health, a $60 billion company.

Most projects start with a defined sense of opportunity—"Make it lighter," "Make it faster," "Make it cheaper." This project was different. Simon Annette, a Product Manager at Cardinal Health, had a vague sense that things can and should be better. Cardinal Health pioneered the use of software to improve patient safety and reduce medication errors, but despite Cardinal's many high-tech innovations, nurses still complained about the poles they used to transport infusion pumps. Simon wanted to change things, and he asked Modo to help.

From down the hall, an old man in a patient gown hobbled along pushing his IV pole just in front of him. The woman beside me muttered; "Poor sod." At that moment, I saw his IV pole as a badge of illness.
Our first user interview set the tone: "They don't matter, and I don't care about them." "IV poles? I can never find one when I want one." We spoke with a range of people including nurses, biomedical technicians, physicians and nurse trainers. And as the hours passed, a handful of themes emerged. Few people had thought much about IV poles, and even fewer seemed to care about them. By lunch, we started to see IV poles as more of a nuisance than an opportunity. 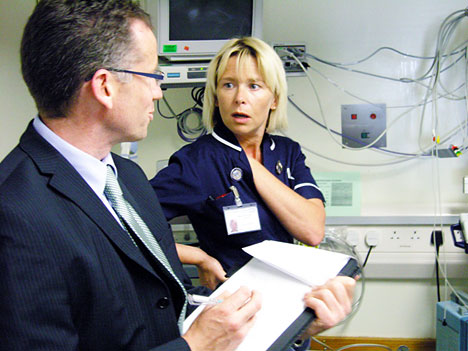 Maeve O'Driscoll, The North Hampshire Hospital, explains her feelings about IV poles: "I hate them."

Our team took careful notes. We listened and we observed. We captured a lot of information on film. At one point, hospital security questioned me while I was photographing the outside of the building; the guard had mistaken me for a potential terrorist. I apologized, explained, and got back to work.

There was no clear direction; no easy feature to add. We needed a break and took one in the waiting room behind the admitting desk. From down the hall, an old man in a patient gown hobbled along pushing his IV pole just in front of him. The woman beside me muttered; "Poor sod." At that moment, I saw his IV pole as a badge of illness. Just the sight of it elicited sympathy and fear. I asked myself: does it have to be this way?

Jackie Campbell, a Nurse Specialist, told us: "We beg, borrow and steal." Each hospital we visited had an underground economy of favors owed and returned, and borrowed IV poles were a form of currency.

In keeping with hospital protocol, every time we crossed from one ward to another, we paused at the double doors and carefully washed our hands. (I washed my hands fourteen times that day.) Although the nurses were adamant about hand washing, we watched them roll IV poles from one ward to the next with no authorization or cleaning regimen. IV poles were a potential source of cross-ward infections.

With limited resources, scrounging becomes a habit in healthcare. At John Radcliffe Hospital, Claire Totoni explained how nurses deal with shortages: "With a roll of tape and a pair of scissors, we can save the world." We were learning to understand healthcare's culture of sacrifice, and wondered if sacrifice was always the best way to get things done. We saw IV poles as a costly distraction from the day-to-day process of providing care.

As we left the engineers, a father and son walked toward us down a long hospital hallway. The father had his arm on his son's shoulder. The boy had his arm on his IV pole. It was as though three people were walking together. I saw the IV pole as the boy's companion.

Our ideas came in flashes. In a cab outside South Kensington Station, we talked about making IV poles furniture instead of equipment. Informing our thoughts was the recognition that healthcare is becoming a consumer business. Hospital administrators and medical staff see that amenities such as good food and thoughtful interiors drive demand for their medical services and hotels are the working metaphor for new hospital design. For Cardinal's hospital environments to reflect that understanding, IV poles would need to change.

Our next stop was an outpatient infusion clinic where patients rest and receive therapy. Could we give each patient a place for a cup of tea and a novel? Could we give each person a greater sense of control over his or her environment? Could their IV poles become personal bistro tables?

Our brainstorming continued as we flew back to the States. We mapped users and traced the movement of poles through different hospitals. We met and talked, then separated and thought about what we had seen and heard. We researched hospital cleaning protocols and analyzed a national program to reduce hospital-acquired infections (HAI's). We were making progress. We finally had a frame, which made us realize that we needed more than a product design. We needed an object and an experience design to support it.

To reduce the risk of cross-ward infection, we created an ID bracelet for each pole so poles from one area of the hospital could not be poached.

Relationships began to emerge as we defined needs and opportunities more clearly. The Process Consultants on our research team drifted in and out of the studio. They looked at sketches and talked about the problems we needed to solve. 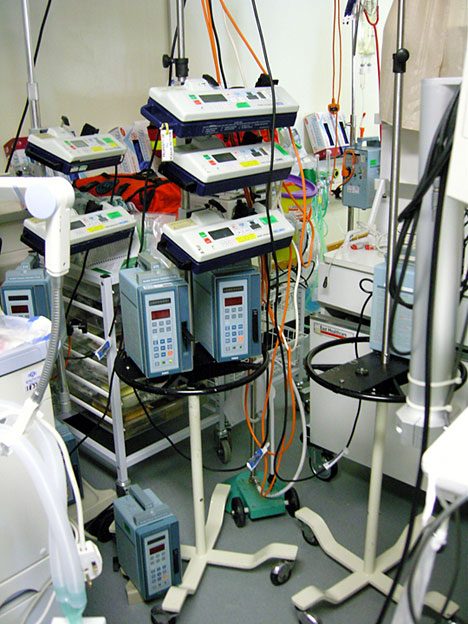 How could we help nurses spend less time searching for poles? Audible alarms would enable nurses to call an IV pole when it goes missing, but audible alarms cost money, disturb patients and use resources. There must be a better way. We created a simple guideline to match the number of pumps and poles. In a general ward, you need seven poles for every ten pumps. It's that simple. If you have enough poles, you lose less time. This guideline lets hospitals recover hundreds of hours of time lost searching for poles. This simple guideline means hospitals recover the cost of a new pole in fewer than 90 days.

What about hospital-acquired infections? Conventional poles are hard to clean. Dave Bishop, a Medical Equipment Engineer put it best: "Castings and weld joints are impossible to clean, they need a sheep dip". First, we Googled "sheep dip," then we refined the base of the pole to minimize surface details for faster, more effective cleaning.

To reduce the risk of cross-ward infection, we created an ID bracelet for each pole so poles from one area of the hospital could not be poached.

When we asked nurses what they wanted most in an IV pole, the answer was always the same: "I want it to be stable." At John Radcliffe Hospital, the record for the most pumps on a single pole is thirteen. We added weight to the base for greater stability and safety. The nurses loved this. We also made process changes by designing a trade-in program so older poles could be removed from use, disinfected and recycled.

We designed a distinctive ring handle to make transport easy and comfortable and an asymmetrical base to create a larger toe envelope and to give every pump system a logical front and back. Finally, nurses could have what they wanted: an IV pole that "wouldn't trip them up." We transformed drooping hangers for IV bags into a distinctive, easy-to-reach Y-leaf, and added a white board so family and friends could exchange greetings and messages. This helped break down the social isolation created by conventional IV poles. We even added a bud vase and a shelf for small objects and belongings. We wanted to support patients as well as technology.

We even added a bud vase and a shelf for small objects and belongings. We wanted to support patients as well as technology.

After an initial surge of interest and excitement, we settled into the process of making the vision real. Setting up production took months. Teams were assembled, agreements were drafted and tooling was designed and built. We had people in China, the U.S. and Europe working on contracts, tooling and business details.

It took weeks to work through mechanics of CE-marking. Finally, production was approved and we began building our global supply chain; what started as a design exploration in Europe was becoming a global product solution. The design made its way to the U.S., Asia and the Middle East. The original set of prototypes is well traveled, and as a result, the Cardinal IV pole has developed an international following.

Modo's research won an IDSA award, a Spark Award, and a Gold Award in IDSA's NW Design Invitational. And Cardinal Health won more infusion business. Final numbers are not in yet. The poles are being integrated into the training process and into the customers' first experience of Cardinal's technology. We expect the pole will be a core offering for years to come.

And what about the patients? Well, they didn't notice anything different. How could they? Increased nurse time, fewer infections and lower maintenance costs aren't that obvious to perceive. This was one of those times, however, when good design was more about making a difference than making a splash.

Goo Sung is Design Manager at Modo, Inc. Since joining the firm in 2005, he has led design efforts on projects for global clients including Boston Scientific, Philips, Cardinal Health, and GE Healthcare. Under Goo's leadership, Modo has earned numerous design awards including the IDEA, Good Design, iF, and Spark Awards. Goo has taught Product Design at the Academy of Arts in San Francisco and is currently an advisor to the design program at the University of Oregon. He can be reached at g.sung[at]modocarts[dot]com.