Official launch of the Kindle DX 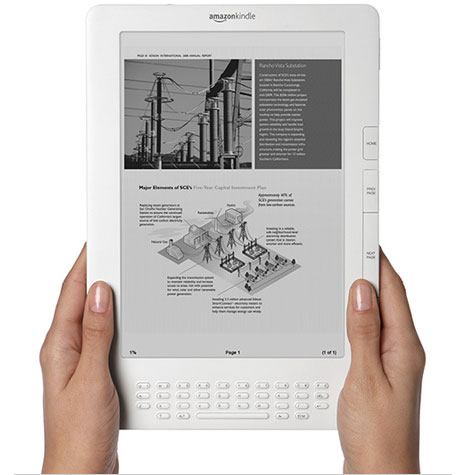 We can no longer call it the Big-Ass Kindle, as Amazon's new product, released earlier today, has official initials: the Kindle DX, for Deluxe.

At two and a half times the size of its predecessors, the DX was designed to supplant newspapers and textbooks. Along those lines, pilot programs have been announced whereby certain colleges will give the $489 device to students as replacements for textbooks. And just as Apple cut deals with the music labels for their iPod/iTunes ecosystem, Amazon has cut deals with three major textbook publishers.

Geoffrey Brackett, the provost of Pace, said the university would be distributing the new Kindles to about 50 students, and comparing them to another cohort of 50 students studying the same material using traditional textbooks, to see differences in how the two groups learn.

The question is, will the device catch on and make that campus bookstore a thing of the past, just as college-town record stores have largely disappeared? Also, what will determine which students get the device? Hopefully they'll come up with a fair system, like giving to students who are more attractive or better-dressed.

via the new york times

Official launch of the Kindle DX