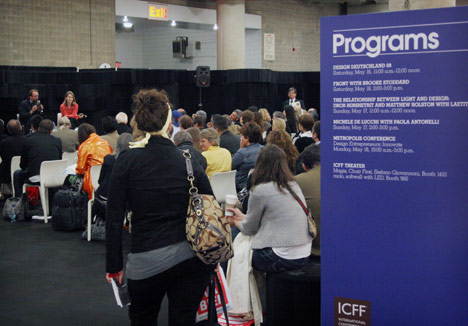 A packed crowd filled the Metropolis Pavilion on Sunday afternoon to hear Michele De Lucchi interviewed by Paola Antonelli. With two such luminaries it was anyone's guess who the audience had come to hear. Antonelli, of course, is the senior curator at the MoMA and De Lucchi is a design icon whose trajectory included the Memphis Collective and Alchimia. Upon introducing De Lucchi, Antonelli explained that they had forgone slides in favor of an open discussion since his industrial design was something anyone would recognize upon seeing. Quite an understatement. As the designer of the iconic Tolomeo lamp for Artimide, De Lucchi literally defined the form that most people recognize as an office desk lamp.

Rather than focus on the objects we know so well, Antonelli instead chose to interview De Lucchi about his life and philosophy. Since De Lucchi had been involved with so many pivotal movements, his anecdotes were a virtual who's who of design icons. After introducing him with the quip, "changing the world one chair at a time," Antonelli let him tell his life story. After ostentatiously choosing to arrive at the Milan Triennale in a Napoleon outfit, De Lucchi met Ettore Sottsass, the center of the Memphis Collective, and the rest, as they say, was history. Antonelli and De Lucchi's easy banter filled the rest of the hour with non-stop quotables and a direct connection to the very origins of postmodern design. 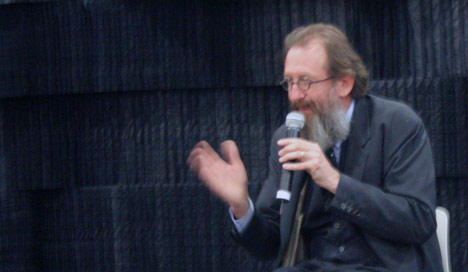 Returning repeatedly to his mentor's thinking that "you cannot design for the society if you do not believe in that society," De Lucchi explored the occasionally thorny philosophical implications of design. After his tenure at Memphis provided him with immediate fame for what he described as, "doing something against the common sense of beauty," he founded Alchimia, which Antonelli described as the start of the post-modern movement. Antonelli then explored the contradictions between Memphis's efforts to do anything but design products and his subsequent work making very manufacturable (and saleable) objects. While that dichotomy was never quite resolved, he was happy to explain that, "none of us got any money from Memphis," and then to observe fondly the current high prices those pieces fetch at auction. 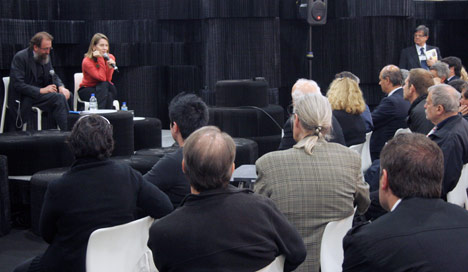 Perhaps the apparent divide between the experimentalism of Mephis and the practicality of his later efforts could find a unifying theme in understanding that the collision of art and manufactured objects includes compromise. Unafraid to embrace paradox, De Lucchi explained that "objects could only be called modern if they were capable of becoming antiques." Likewise, he understood that being a designer meant that one had to embrace manufacture, but that "there was no obvious reason to love industry." After listing a litany of the sins of industry, he easily segued into descriptions of his favorite design experiences with a smile.

It seems that for a young man who was "very much against teaching," De Lucchi now happily embraces his students and the opportunity to talk and teach. The contrast between the philosophical inquiries with which he filled his youth and the enthusiasm with which he designed later in life taught the crowd that while the idealism of youth allows wild exploration of thought, our species' history of toolmaking means defines creation as the primal act of man. 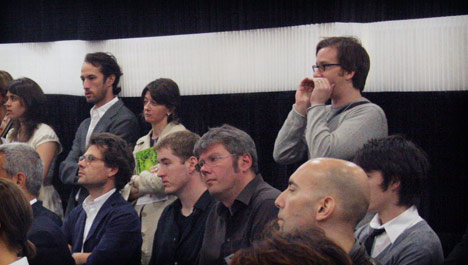