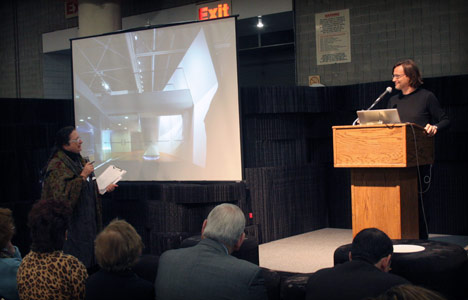 Monday morning at the Metropolis pavilion marked the beginning of the full day conference on Design Entrepreneurs entitled "Innovate." Susan Szenasy, Metropolis Editor and Chief, and Bruce Brigham, President of the American Society of Interior Designers, took on the hosting duties.

The first speaker was James Ludwig, the head of global design at Steelcase, the pioneering green furniture manufacturer and majority owner of IDEO. Speaking rapidfire, the clearly enthusiastic Ludwig explained how his planned three year stint at Steelcase grew into a ten year residency. Accompanied by beautifully designed slides that would make a typesetter proud, Ludwig began by talking about "the language of design," but rapidly morphed into a discussion of usage and production. He drew an illuminating continuum of architectural scale versus user scale showing how large and lasting products needed to be timeless, but small user-scale products could afford to be both timely and personal. From there he discussed Steelcase's design philosophy (smart, desirable, and viable). As a sign of the times, he listed sustainability under the "desirable" category rather than the more obvious smart or viable, but perhaps that befits a company that received the first LEED Certification for a manufacturing plant. After that framework he broke headlong into several illuminating case studies very rich in both process and slides.Given the amount of user testing he showed in his slides, the category that seemed most suitable for Steelcase's products is "smart," demonstrating clearly that offices of the future should be fixated as much on data as ergonomics. The c:scape project reimagined the cubicle with an emphasis on communication and cable management, while the media:scape project rethought the way that laptop users interact in a conference room. From there he addressed two chair products that rethought sitting to allow movement or, as he put it, "squirming." The squirmy Cobi task chair was lovely to gaze at, and the i2i chair certainly blazed a trail in a new category as the first office lounge chair I've ever heard of. While it's tough to analyze a chair by its visual characteristics alone (and i2i's weren't my cup of tea anyway), the cavalcade of prototypes and models that heralded i2i's development led me to believe that it was probably a joy to sit in. Ludwig closed with mention of the recent trend toward the inclusion of design in business school, unquestionably a good trend ... unless such teaching leads management to believe they should be running the design process as well. 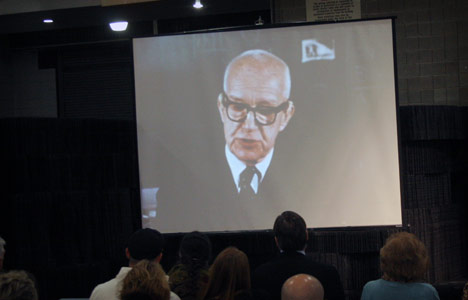 The next speaker was Jonathan Marvel, representing the Buckminster Fuller Institute. He spoke for a brief while about his childhood and his experiences interacting with his uncle Bucky: Coolest. Relative. Ever. While he provided some backstory on little-mentioned aspects of Bucky's life (like how his extreme myopia as a child may have shaped his holistic view of the world), the presentation was eventually dominated by archive footage of the genius speaking. Although the disembodied head of Fuller speaking stridently to the audience looked like a scene from 1984, the message that Bucky conveyed was far more utopian. Reiterating that function was beauty, Fuller narrated from the past the importance of good design in solving problems with the least material, a message at least as important in our era of sustainability as it had been decades ago. Prescient indeed. 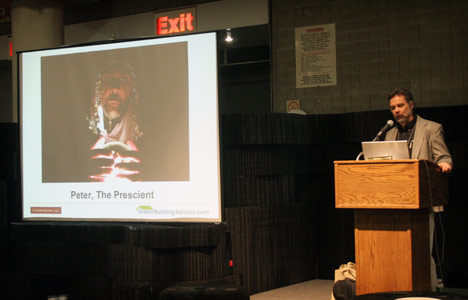 Wrapping up the morning round of speakers was Peter Yost, program manager for BuildingGreen and Green Building Advisor. Although more focused on interior design and architecture than the earlier speakers, he packed plenty of pertinent content into his hour. Speaking at length about the historical failures of human beings at predicting the future (we were worried about global cooling!) thirty odd years ago, he walked through the problems that human beings are worried about today without the benefit of hindsight. Even though he did offer that we may be remarkably poor prognosticators, he also acknowledged that the rethinking of interior architecture could benefit society, or at least our pocketbooks. With a presentation veering from Tim Berners-Lee's invention of the World Wide Web to Bill McKibben's Deep Economy Yost imagined a future where his childrens' life was perhaps similar to that of his Depression-era grandmother. Fortunately, since such a life would likely consist of struggle, he balanced that with the anticipation that human knowledge and networking was changing the way we live as well. Using LL Bean's return policy as an example, he suggested that builders of the future become involved in the entire product lifecycle. Since every industrial designer is told that the failure of a product can be seen as an opportunity to learn about the ways that usage and wear reveal flaws in manufacture. A society like that, where designers have responsibility for their products and owners strive to keep good designs for as long as they live might just be the sort that could help us avert a future of rising sea tides, even without the benefit of hindsight.

Use our Essential Guide to NY Design Week 2009 to find the best stuff (Mobile version for your phone too!) >>View all of Core77's New York Design Week 09 coverage