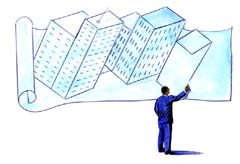 From 'Star Projects' to White Elephants: The Changing Rules for Urban Development in Spain

What were considered "star" urban projects in Spain just a short time ago have become white elephants, according to research by Gildo Seisdedos, a professor of marketing and urban strategies at Madrid's IE Business School and the director of the Urban Management Forum.

"These urban white elephants range from iconic buildings to events on a global scale," according to Seisdedos. Alarmed by the economic crisis, Seisdedos says, taxpayers in Spain are more and more critical of large-scale government-sponsored development projects and question the benefits that come from them.

There could be a political price to pay in May 2011, when the entire country participates in municipal elections. In his study, Seisdedos asks: What kind of urban policies does this new situation call for?