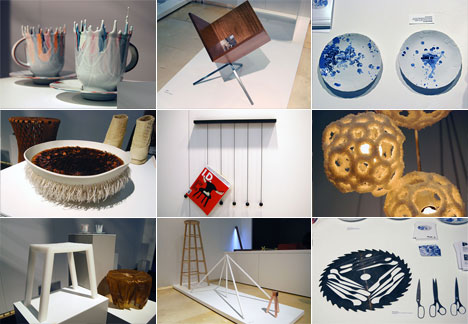 We love it when design students hold their own next to the big guys, and we're thrilled to report that the Cranbrook Academy of Art, Pratt Institute and the Rhode Island School of Design presented stellar booths at this year's ICFF, all culminations of classes and workshops that focused on various aspects of contemporary design issues.

Hit the jump for more details on all three groups!

Cranbrook's exhibition, entitled Innate Gestures, came out of a semester long workshop, led by Scott Klinker and Leon Ransmeier, that focused on the nuance of the physical relationships between the body and the objects it interacts with, resulting in enigmatic products that demand an investigation of themselves by the user. For example, Jonathan Muecke describes his Heater as "a physical non object" and his Copper Step Stool as "an able bodied mass." Heater is tall, spatial and gently heated, inviting users to touch it, sit by it or lean against it for comfort. The Copper Step Stool is sized only for the ball of the foot, providing stability through its tripod base, and, by nature of its form, forcing the user to launch themselves upwards and only for a moment. While vague in function, the objects in this show are precise in material and character, leaving the interpretation of the interaction and use open to the user, and, in many ways, suggesting new uses, habits and spatial divisions in everyday life.

Pratt Institute's students operated within a much more quantifiable concept: Design for a Dollar, led by Professor Mark Goetz, encouraged students to explore the design and fabrication choices available to them when working with material costs that amounted to a dollar or less. The result is a diverse and clever collection of furniture and tabletop objects that illustrate the richness and complexity that design can bring to an object, even when the material value is low. For example, in the growing tradition of contemporary decorative arts, Catherine Merrick drips wax onto second-hand ceramic plates and sandblasts away the exposed area, resulting in a new method of decoration. Equally resourcefully (but a bit more utilitarian), Brian Persico laser cuts scissor components from used sawblades, resulting in a new, sharp object with the character and history of something already discarded. The transformations represented in the objects shown by Pratt were impressive -- each designer took steps to create something new from the scant materials they chose to work with.

In conclusion, great job, guys! We laud your insights and hard work.