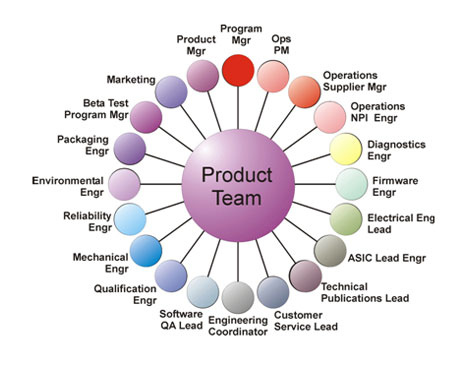 When I saw that diagram above, which is an approximation of the product development teams at Sun and Apple, I thought the same thing as you: Where the heck's the industrial designer?

Even in diagrams, it seems, we are invisible. Sigh.

The diagram is from an article on corporate product development processes in Product Design and Development. If you've ever wondered how stuff gets made outside of design firms, in situations where you've got literally dozens of departments that all have to sign off on various parts of the process, then this will make fascinating reading for you.

Of course, if you've already lived this process, as a designer it can be just plain frustrating. An excerpt:

At Sun we had a very talented Industrial Design (ID) group. On a new "Thin Client" computer project, the manufacturing and design strategy called for utilizing an external OEM partner in South Korea. A problem came up during development which highlighted the very different views (assumptions) we had of each other's processes.

Early in the project the ID group released a cool looking 3D surface CAD model of the enclosure. The OEM ME's began adding detailed features such as wall thickness, mounting bosses, ribs, etc. However when they came across a problem they did what they normally do - they fixed it! ...but didn't tell us.

A month and a half later the ME's sent back 3D CAD models of the finished enclosure for our review and approval. I setup a design review which included the lead Industrial Designer. The ID person noticed that a change had been made to the top vents. The change violated the new corporate "design language".

This was bad because the new computer was one of a family of products that were being introduced with the new look. The vent shape was a key design element used to identifying the next generation of faster/better computers.

It turns out that the OEM's mechanical engineers discovered early on that the vent shape would have prevented the parts from coming off of the plastic mold so they changed it. Apparently, they considered the change minor, not worth mentioning, and in the interest of time simply made the change.

The lead Industrial Designer was angry that he hadn't been informed of the problem. He assumed he would be consulted whenever a change affected aesthetics which was modus operandi for all previous projects where the mechanical design was done internally....