The Context of 'Low Product': How designers can help articulate a new social language, by Ann Thorpe 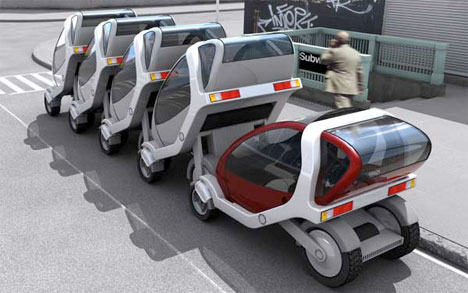 Enter the city car, knitfitti and the floating swimming pool

Will "no product" become the new brand? John Hockenberry provocatively suggests that given the global economic crisis, "no product" is now plausible. But how plausible given our society organized around economic growth? I'm talking here about consumerism as both the primary purpose of growth, and its principal driver—the high product context.

Reliance on continuous growth makes the economy unstable (it must grow or it collapses) as well as unsustainable (it strives for infinite growth on finite planetary resources). Tim Jackson provides a very accessible overview of this situation in his great new report, Prosperity without Growth?, in which he also proposes an alternative—a steady state economy. Enter the "low product" context. Enter the Nomadic Prayer Space, knitfitti and the floating swimming pool. Before getting to the examples and the implications for design of a steady state economy, let's explore "growth" a bit more.

A central problem with growth—the reason why its purpose is consumerism—is that society has implicitly accepted the idea that continuous increases in consumption are equal to continuous increases in wellbeing. But evidence from across cultures, age groups and income groups shows that this equation does not compute. Tim Kasser's work indicates that people who organize their lives mainly around material wealth, such as consumer goods or income, are less able to find wellbeing. Rather, after a person reaches a relatively low level (by Western standards) of material wealth, as corny as it may sound, their happiness hinges on inner growth, through the quality of their personal relationships, sense of self, and participation in the community.

So why do we continue to consume? Most designers are aware of their role in cultivating consumer desire, and of design's (sometimes dominant) marketing function. Beyond simple desire though, material goods currently form a prevalent "social language" through which we participate in society, creating identities, affiliations and expressing our aspirations and affections (such as in gift giving)—"stuff is not just stuff."

But material goods have a darker, anxiety-producing side, in which they help us avoid shame. Novel or expensive consumer goods gain us a certain position in society, a position lost without relentless striving. This is what's known as "positional" consumption. It's one way that consumerism advances individualism, and partly why, ironically, consumer change can't be left to the realm of individual choice. Simplistic appeals to "consume less" won't work. Novelty and anxiety are two key factors in the social logic that drives consumption.

Jackson concludes that as long as social progress "depends on the self-reinforcing cycle of novelty and anxiety, the problem can only get worse," destructively churning through materials and energy without gaining well being for individuals or society.

A steady state economy probably means a "low product" rather than a "no product" scenario. We'll still have needs for basic material goods, and "stuff" will still make up some of our social language. But moving from high product to low product contexts has large implications for design, as Hockenberry suggests, and they go far beyond the "one-for-life" tools and objects he proposes.

Implications for Design Perhaps the central implication of a "low product" scenario is that designers could help articulate a new "social language." A new language would rely largely on inner growth and improved social contexts as a means to well being, rather than material goods and individual purchases. What will we do instead of shop? Alternatives include things like self-provisioning (DIY), sharing, or community provisioning. Interestingly, a non-purchase solution doesn't have to mean a non-design solution, as these emerging categories indicate: 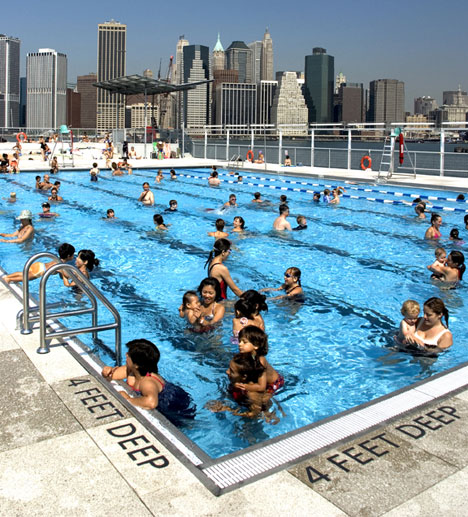 Portable and/or flexible spaces Examples include a portable performance space that an arts group deploys in available vacant office space (by a Parson's design/build workshop) and a barge mounted community swimming pool on the Hudson River (by architect Jonathan Kirschenfeld for the Neptune Foundation).

Shared objects Examples include MIT's stackable city car designed as an extension of public transit and the Borrow, Lend, Unite network, that connects a neighborhood through an interface letting neighbors each know what the other are willing to lend (such as power tools).

DIY Examples include clothing designs where consumers cut garments to fit, modify unusually sized garments, or draw on garments with fabric pens (as reported in Kate Fletcher's Sustainable Fashion and Textiles) and projects like ReadyMade, offering instructions, rather than finished products

The first two categories focus designers on community use rather than individual consumers, whereas DIY focuses designers on enabling individuals. All engage outside the realm of individually purchased goods. Indeed these types of solutions, which are not commodities, have typically lacked needed investments that would make them work well.

This investment problem signals another implication of a "low product" economy. Public and nonprofit sectors are likely to play a bigger role in society at large, able to invest in a bigger space for civic life. This is one thing that a model of a steady-state economy suggests, as reported by Jackson. How would design find expression in the civic sector?

One possibility is in the design of public sector processes, such as voting. Examples emerge from the AIGA Design for Democracy project and the University of Minnesota's Vote Project. Another broad area is design policy (General Services Administration's Design Excellence (in architecture) Program, the nascent U.S. national design policy initiative) and the task of bringing much better and stronger design interpretations to existing policy.

If we're serious about finding alternatives to consumerism, to shopping and acquiring positional goods, then we need civic places that catalyze these alternatives.

Design also finds expression in the public sector through the physical aspects of civic life, such as public spaces, civic institutions (libraries, schools etc.), public transportation—even street life. How does urban life look when it is not dominated by advertising? If we're serious about finding alternatives to consumerism, to shopping and acquiring positional goods, then we need civic places that catalyze these alternatives. Interesting categories are emerging here that start to overcome the disinvestment in public places of the past decades:

Civic "furnishings" furniture examples include the proposal for wired street furniture that acts more like a café than a public bench (by the Center for Urban Pedagodgy) and Montreal's new urban furniture (by Michel Dallaire Design Industriel); "flooring" examples include biopavers with seed-embedded, biodegradable centers to achieve in one pass both permeable paving and ground cover vegetation that scrubs out pollutants.

Lighting Examples include proposals for street lighting that dims in response to bright moonlight (by Civil Twilight), and the first ever city lighting plan developed in Helsinki to acknowledge not only energy and atmosphere considerations, but also the fact some places should stay dark.

A larger public sector role requires not just public investment, but also more active citizens (as opposed to consumers) who participate in broader dimensions of civic life. A larger civic sector could enable this participation through nonprofit groups as well as a growing sector of social enterprises, businesses seeking to optimize social benefit (rather than profit) without suffering a financial loss. Interesting co-design categories are emerging here: 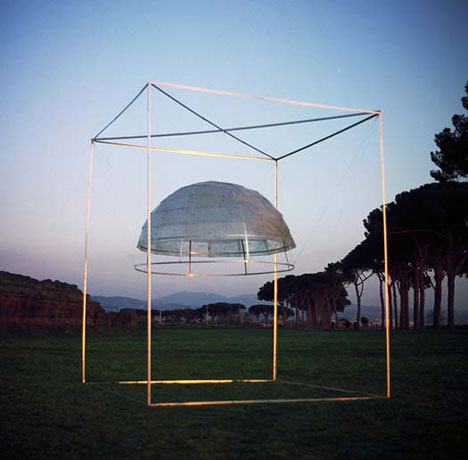 Facilitation Examples include the skeletal Nomadic Prayer Space, transportable in a compact car, to facilitate contemplative communities in diverse urban settings (by architect Michael Herrman), the mobile chaplet (by Moorhead, Moorhead & Moorhead) and card decks designed as tools to help people create and manipulate their own narratives about landscape (such as landscape architect Jane Wolff's Delta Primer Playing Cards) or shelter (such as Sustainable Everyday's enabling cards).

Open source Examples include tagging projects such as knitfitti, yellow arrow, or places-that-matter where local people physically mark or embellish places of significance to the themselves or the community, and Ronen Kadushin's open design patterns.

Like previous examples, these co-design categories steer our focus away from passive individual ownership, toward actions and helping people articulate community meaning. Articulating a "low product" social language will require making substantial changes in embedded practices—how we live, travel, work and play. Designers are in a position to help others visualize, and where necessary, construct alternative practices.

Designers alone can't bring about a steady state economy, but we can begin to use the economy for sustainable ends, rather than letting the economy use us solely for economic growth.

Conclusions The emerging categories outlined above obviously don't constitute a complete new social language that can replace consumerism's language of material goods. A new social language is unknown territory for all of us, and requires research and experimentation in design and other disciplines. Design research probably involves questions of method—how can designers facilitate rather than just "user test"—but also questions of material use and social practice.

One thing the "low product" scenario seems to suggest is that designers across disciplines are likely to become what Guy Julier labels "media agnostic," as they focus more on social practices and social meaning rather than constant novelty in specific artifacts (such as products, buildings, or clothing). Some people may find the low product scenario mundane and lacking in glamour. But this perspective might change once all businesses are social enterprises, an increasingly plausible scenario suggested by a pioneer in the field, Pamela Hartigan, who anticipates this conversion of business practices within the next 15 years. 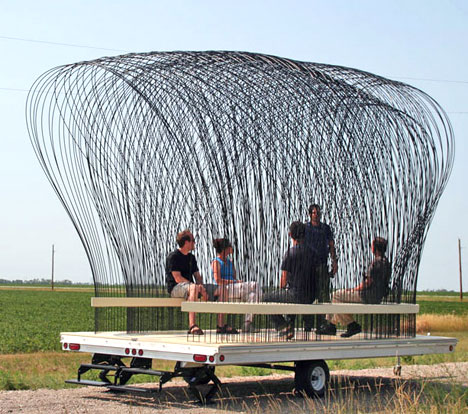 Media agnosticism: is it industrial design or is it architecture? Artist Marjorie Schlossman's Roberts Street Chaplet Project, chaplet by Richard Moorhead and his sons Moorhead & Moorhead.

The bottom line, if you'll excuse the pun, is that designers need to see and understand the economy before they can grapple with how to organize their own work. Unfortunately most discussions of sustainable design gloss over the workings of the economy (my own book deals with it substantially and, I like to think, accessibly in design terms). Designers alone can't bring about a steady state economy, but we can begin to use the economy for sustainable ends, rather than letting the economy use us solely for economic growth. This challenge requires us to simultaneously deal with the daily realities of the high product context (where we typically try to make existing consumerism more efficient), while simultaneously plotting moves towards the low product context.

The transition to a sustainable economy is no small project, making the tiny "green" components of the current recovery packages (roughly 10% in each of the US packages and 7% in the UK, analysis here) almost laughable if they weren't so desperately important. Whether you're concerned with peak oil (or peak water, minerals or soil), global poverty, or climate stability, or just having a job five years from now, one message is clear. The window for passing through to a sustainable economy is small and the job is big. It has to be now. It has to be all of us. We are the beginnings of the low product economy.

Ann Thorpe is the author of The Designer's Atlas of Sustainability (Island Press, 2007) and the publisher of the blog Design Activism. She teaches and researches sustainable design in the fields of product design and architecture at Bartlett School of Architecture (University College London) and at the Open University. She has lectured widely on sustainable design.

The Context of 'Low Product': How designers can help articulate a new social language, by Ann Thorpe