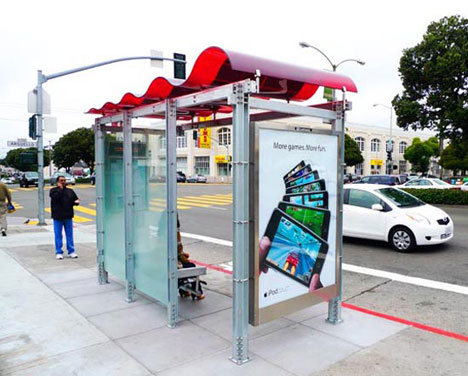 San Francisco has unveiled their awesome new bus shelters, produced by a partnership between the San Francisco Municipal Transportation Agency, transit shelter advertising and maintenance contractor Clear Channel Outdoor, and SF-based architecture firm Lundberg design. The new shelters will feature two large maps, Push-to-Talk intercoms for the visually impaired, and solar panels that will power both LED lighting and integrated Wi-Fi hotspots. This project was two years in the making and are currently undergoing final testing. An estimated 1,100 shelters will eventually go online.

In contrast, Core's hometown of New York City can't seem to get it together--last year a member of an NYC advisory committee stated that "We don't think municipal Wi-Fi will succeed." Well, it won't with that kind of attitude!