Motorola's struggles with product design over the past few years tell a well-documented cautionary tale. The close observer can practically watch the monthly tides of design strategy ebb and flow, washing an occasional, gem-like RAZR or PEBL up on the beach, along with the more frequent seaweed-pile of a phone, too tangled up in its own confused strands to draw covetous eyes away from shinier competitors' offerings. These variances of design success have been an ongoing topic on Core77 for years, swinging between high praise and scornful rebuke, and sparking some impassioned discussions on the boards as well. The upshot: Motorola's clearly shown that they can do good design, so why don't they do it more often?

Part of the reason for this unevenness, compared with Nokia, LG and others, may well be the vision thing: Motorola was first to the dance with its Star-Tac 25 years ago, but has spent most of its time since then with little coherent sense of what its devices, and by extension its brand, ought to be like.

In conversation last week with Dickon Isaac, Motorola's North American design manager, the possible explanation of a "design mythology" came up: the idea that a set of universal aspirations are crucial for an organization to develop the drive and coherence necessary for real innovation and a unified identity, much as engineers in the 50s and 60s looked to the gee-whiz sci-fi of their youth for inspiration in developing the space program.In an effort to build such a mythology, 31 of Motorola's designers, from five different offices around the globe, have been dedicating a portion of their time since late last year to a project called "Motorola 2033." The initiative, under the auspices of the Consumer Experience Design team (CXD), uses the 25th anniversary of the mobile phone as an opportunity to imagine mobile device design 25 years on, resulting in a curious set of research-based blue sky concepts rooted in some fantastical, yet plausible suppositions. From Motorola's official release, these are:

>> Communication could be ambient, always on and people could live online >> Computers and mobile devices could be embedded in the ordinary >> "Using Software" could vanish; only interface and human interaction would remain >> Device interaction could become natural, predictive and fluid so people could be free to relax >> Molecular manufacturing could revolutionize production >> Technology could outpace the brainâ€™s ability to absorb, intelligent 'agents' filter >> Objects could access 'The Cloud' at will

The results range from the relatively obvious (a phone embedded in a ring), to the technologically unlikely ('Minority Report' style gestures and floating screens), and the genuinely inspiring--especially when they start leveraging the extensive non-US, non-Europe influence in their distributed team. With two of the five participating design studios located in Asia, and a third in Sao Paulo, the opportunity for some left-field concepts is strong, and from the descriptions and renderings it looks like they seized it, in the form of regionally-specific mission statements. The Seoul studio, for example, acknowledged Korea's world-beating rate of technology adoption ("Mobile devices are burden free and allow immersion in cyber space"), while Brazil's focused on community empowerment, and Chicago's on gestural interface and identity protection.

Here are a few of the more exciting concepts: 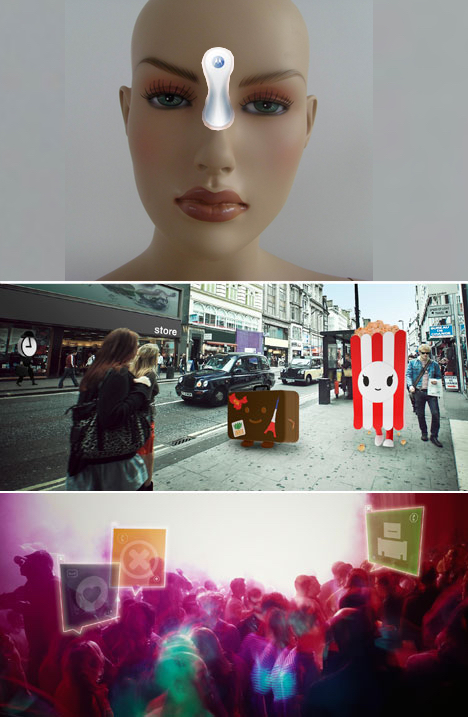 2nd Sight, from the UK: Not a phone at all, but a sort of visual prosthetic that perches on the bridge of your nose, overlaying avatars and other information on the regular field of view. The whole augmented reality thing sounds fun, but given the near-certainty of photoreal on-the-fly animation in the next decade, we have to wonder if being unable to tell reality from avatar is a good thing. Fortunately, in this rendering at least, avatars still look like avatars. 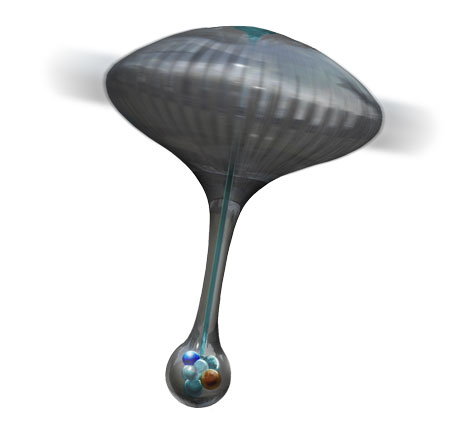 Tender, from Seoul: The furthest out of the concepts, this relies on so many nonexistant technologies (levitation, holograms, etc.) we have to wonder if 25 years is long enough; yet it's clearly a great example of stretching the definition of what a mobile device could be. "Tender" in this case references boats and railroad cars that support the main vehicle, rather than a descriptive term for steak, and so this jellyfish-like object floats around behind its user, interpreting gestures and voice commands to enable communication, as well as "alerting users to potential dangers." 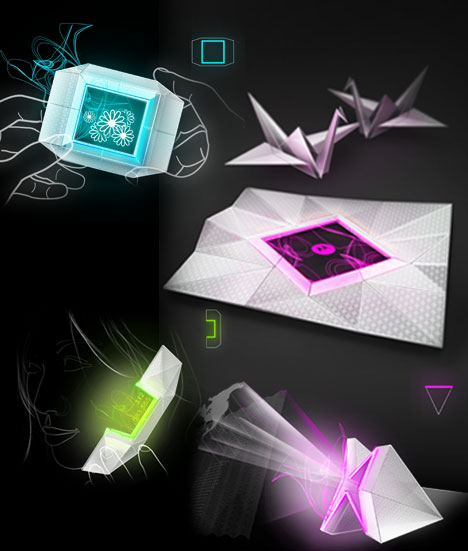 Origami, from North America: The most immediately charming concept, it maximizes the sheer joy of interacting with your device--a strategy that's served Apple well over the years. A thin, segmented sheet of technostuff, it can be folded into different forms to serve different functions: phone, recording device, camera, and, presumably, pointy paper crane. We want one of these. 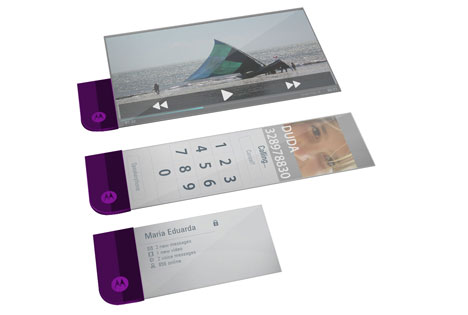 The Metamorphose concept, from South America, also changes shape to provide different functions, this time by shaking (no, not possible, but come on...it's the future). True to the studio's focus, it emphasizes social engagement with a "business card" mode specifically for interacting with other devices. The Yangsheng concept from China also skews toward multi-person use by sensing biometric data from anyone touching it, and forming virtual connections to augment their physical proximity. 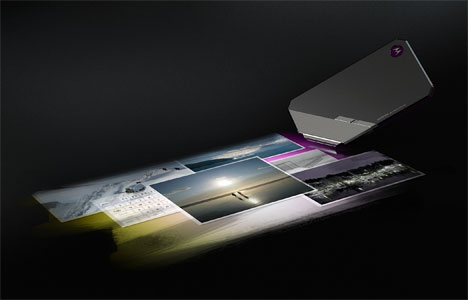 Communidad, also from South America (though we're partial to its alternate name, Pixydust): Given the recent craze for nano-projectors, a device that interfaces exclusively through projected image seems quite reasonable; this concept seizes firmly on the multi-person potential of the medium to propose a thin wafer of a device that shines information on any handy surface, turning "every blank space into a canvas for self-expression, letting users express themselves with digital graffiti."

Of the remaining six concepts, three turn the device into a wearable object (Tattoo, Ring and Exo), two emphasize the longer term life-recording and -influencing effects of mobile devices (the shell-like MEM, and the Life Compass), and the Liquid Card goes the "floating screen" route which, depending on your willingness to suspend disbelief, is either ridiculous or awesome.

Any of these would make a worthwhile online video or mini-site, and though Motorola's keeping mum about next steps for developing these concepts, we're eager to hear more. Whether this satisfies the more crucial goal of creating a sturdy corporate mythology for the inspiration of future designers depends a lot on how far they run with it.