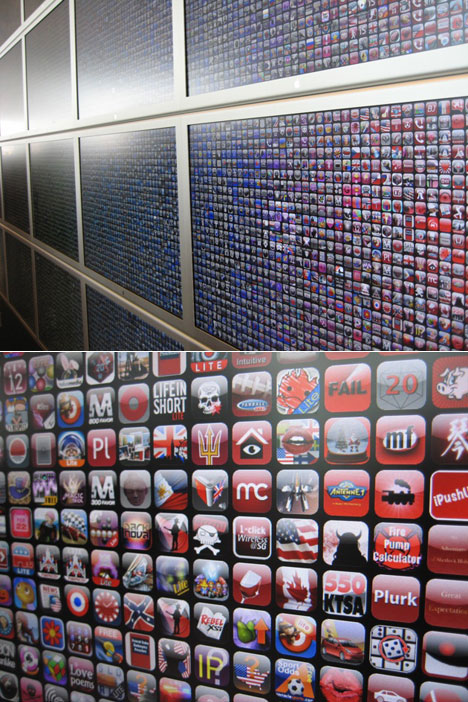 Apple had a brilliant, NYU-ITP-worthy display up at the Moscone Center (captured by TechCrunch): a grid of 20 Cinema Display monitors loaded with icons for iPhone apps available at the app store. The cool part: Every time an app was purchased, it pulsated on-screen, leading to a pebbles-dropped-in-water effect:

The new iPhone 3G S is on the way in a couple of weeks. The differences between this generation and the last are subtle and mostly internal: More RAM and storage, faster processor, better camera with video and touchscreen manual focus, voice control, digital compass neatly linked to map app.

As the blogosphere gets flooded with (mostly repetitive) iPhone news, these are the few bits we found of the most interest:

Cult of Mac theorizes on "Why Apple Stuck With the Same iPhone Hardware Design." (Short answer: They feel the ID teams are focusing all of their efforts on the rumored-to-be-forthcoming iTablet.)

TUAW pontificates on AT&T screwing loyal iPhone 3G users with high upgrade prices. This piece (and countless others like it) seems to be stirring up the most online vitriol; expect there to soon be a rash of "oh stop whining" backlash pieces.

Gizmodo reports on the (3G) $99 iPhone, which ought to lead to a wave of carrier conversions and some serious market dominance.