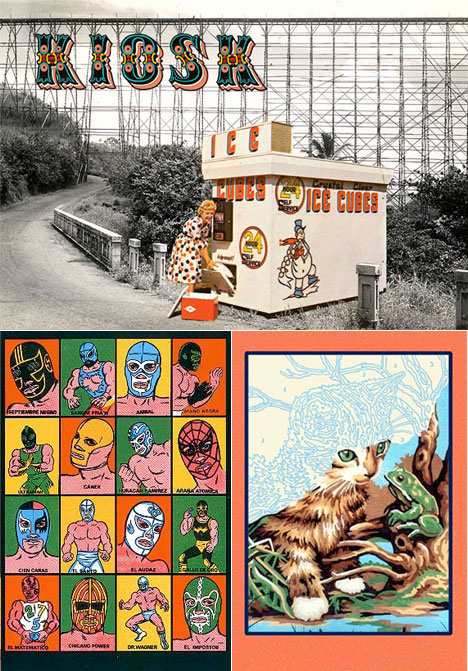 Kiosk, the Soho store that purveys everyday goods curated from locations around the world, hosts mini-exhibitions in their 2nd floor space on Spring Street. Tonight marks the opening of their 12th, an homage to the prolific and humorous postcardist Ken Brown. The opening party is tonight, June 11th, from 7-9 pm, but the show will run through the 20th.

Here is a short interview with Ken, pulled from their blog: Background: "My first experience as a practicing artist was as a film maker. During the late 60's I created dozens of short experimental films that became part of a New England based light show which for over 2 and a half years played with everyone from Jimi Hendrix to the Velvet Underground, the Who etc."

Reason: "I've always loved postcards. They are the original populist medium, affordable, accessible and abundant and, as an artist interested in skirting the gallery system, they seemed like an ideal way to get work out to a larger audience. I admit that I had no idea what I was doing and had no business plan, but in 1975, I took what little savings I had and invested in a print run of 2000 each of 12 different photographic postcards."

Development: "In 1985, in another feet first production, we moved to NYC. I continue to juggle design work as an active art/entrepreneurial enterprise while also producing regular spots for MTV and Sesame St. Also in 1985, Harper and Row (now Harper Collins) publish a collection of my cartoons- Notes from the Nervous Breakdown Lane"

Influences: I have a long standing love of American pop culture and it remains a constant theme throughout my work.

How many cards: Over 34 years and close to 700 different designs, a rough guess would be about 2 to 3 million cards littering the landscape.

Summation: "I love living in New York and thrive on the culture and general visual vibrancy of the place. uh oh, ... starting to ramble"