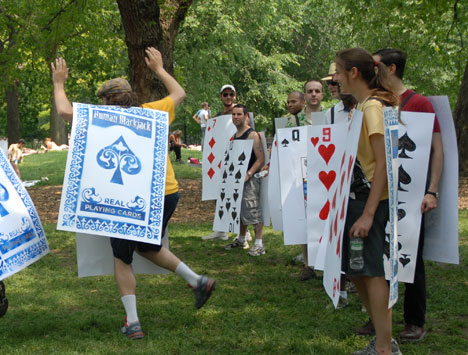 If you're in NYC this weekend and looking to get your game on, check out the Come Out & Play 2009 festival, taking place, well... everywhere. The festival starts today and is open to the public, giving people the chance to participate in games that include myriad combinations of low-tech/high-tech mashups. Games include real world environments, mapping and GPS technologies, mobile apps, constructed sculptural props and public screens. The New York Times calls the event a showcase of "participatory art" and comments on how its events "break down walls between artist and audience".

The Come Out & Play website describes some of the games from previous years:

Friends faced off in life-sized Pong using only their ears to "hear" the ball. (Papier-mache) pigeons were pummeled with wiffleball bats. Bicyclists armed with spray chalk and stencils competed to claim and build bike lanes. Stragers worked together to build and race blindly through labyrinths as part of a ancient lost sport. Payphones produced points and Tompkins Square Park became a putt-putt course. 200 people performed stunts to display on the Reuters screen in Times Square.