Thomas Thwaites' Toaster Project at the Royal College of Art 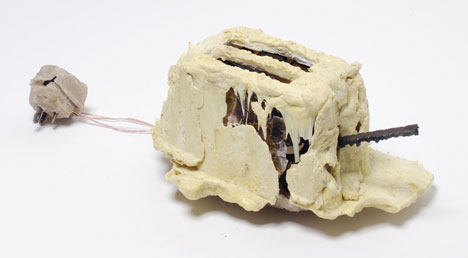 Want to get some industrial designers riled up? Get them talking about how detached modern consumers are from the manufacturing process.

At some point in their education or early career, most product designers are faced with the realization that current standards of living depend on massively complicated networks of suppliers, manufacturers and distributors, and that hardly anyone considers their existence when making purchasing decisions. Initially a source of fascination, akin to discovering a secret world in your basement or something, it often turns to frustration. A repeated argument of the sustainable design movement holds that if people only understood how much effort and expertise, and how many resources went into the production of their inexpensive goods, they wouldn't be nearly so cavalier about chucking them in the garbage at the first glimpse of something prettier.

Rather than spilling more ink about this global phenomenon, Royal College of Art student Thomas Thwaites (MA Design Interactions) has turned to a demonstration, in the form of a toaster. He's been building one for the past several months from scratch, in the most thorough, radical sense possible: the project has seen him visiting mines and oil drilling platforms to obtain raw materials, synthesizing plastic for insulation, and learning to smelt iron in a microwave:

Step 2, Attempt 2: Smelting Iron Ore in a Microwave from Thomas Thwaites on Vimeo.

The irony of employing a complex device like a microwave to enable a relatively primitive manufacturing operation doesn't appear to be lost on Thwaites, and the project as a whole has a clear appreciation of the absurdity of it all. The commentary and description on his own site, and the coverage it received as a work-in-progress back in February on We Make Money Not Art, both point to a complex set of objectives and motivations. "The practical aspects of the project are rather a lot of fun," he observes. "They also serve as a vehicle through which theoretical issues can be raised and investigated. Commercial extraction and processing of the necessary materials happens on a scale that is difficult to resolve into the domestic toaster." 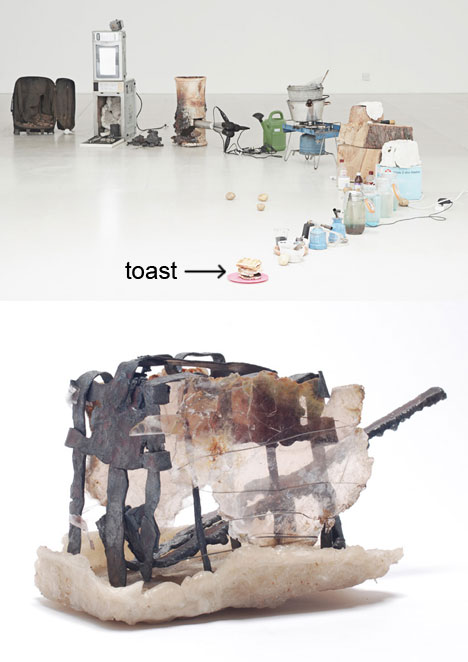 So, while this toaster is clearly ridiculous, are toasters in general? Thwaites is using a commercially available toaster that retails for four pounds sterling as a model for emulation, and places it atop a pedestal in his display, equating it to a work of art or high technology. Which, after reviewing the arduous process needed to build even a crude facsimile of it from scratch, it may very well be.

The Toaster Project will be on display at the RCA SHOW TWO in London, starting Friday, June 26. Via Develop 3D. Photo Credits: Daniel Alexander (top and bottom), Nick Ballon (middle).

Thomas Thwaites' Toaster Project at the Royal College of Art