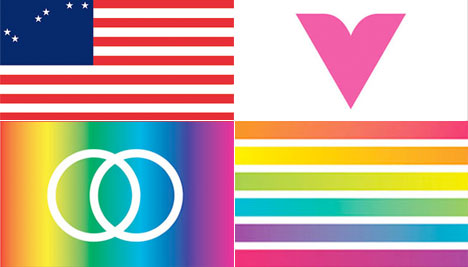 Studio 360 asked Worldstudio to redesign the 30-year old gay pride flag "in honor of the 40th anniversary of the Stonewall riots that marked the first salvo in the gay rights revolution." While the 1978 original represents unity (inspired by the rainbow peace flag), these proposals tackle some of the issues facing the LBGT community today--same-sex marriage and national identity in particular. For example, Isaac Mizrahi's favorite (top left) doesn't use rainbow colors at all. Instead, it's a modification of the existing US flag, representing only those states that have legalized gay marriage.

See the entire slideshow here and be sure to vote for your favorite!

via the daily heller