Physical interface design: CMU's inflatable buttons will be a game-changer 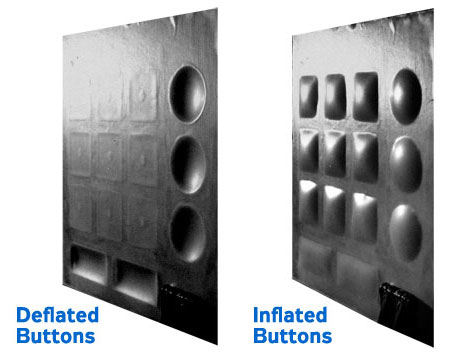 When it comes to designing a physical interface, you've got a big choice to make: Go the Blackberry route and spec out proper buttons, which offer tactility but are fixed, or go the iPhone route and opt for a touchscreen, which can display an infinite amount of menus but offer zero tactility.

That choice may soon become moot, thanks to researchers at Carnegie Mellon University and the novel screen they have produced. Made from latex, portions of the screen can be "pumped up" or "sucked in" using an air pump to create physical buttons. It has to be seen to be believed:

How rad is that? And if they are able to get the buttons smaller, it should be a relatively easy matter to write software that will translate visual text into Braille, opening up touchscreens for use by the visually impaired.

Physical interface design: CMU's inflatable buttons will be a game-changer