Design Club: Why young American designers are ganging up 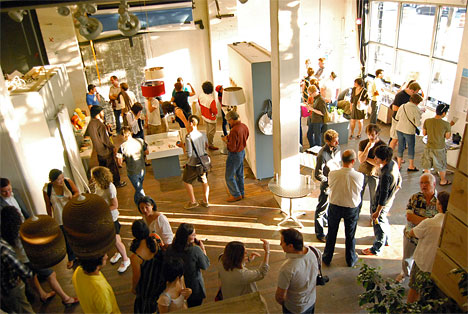 As a young American designer, I am both involved with and excited by the emerging trend of design clubs in America. Although very new, these groups have the potential to create a design scene in the U.S. as vibrant and well-supported as that of Europe. Furthermore, their simultaneous formation signals a shift in American design culture—we now live in a moment where design is cited regularly as a source of economic, social and cultural growth; a national design policy is stewing; and young designers are encouraged to go into business for themselves.

Three independent design associations formed in 2009: the American Design Club in New York, JOIN:Design Seattle, and the Object Design League in Chicago. Established by designers who are dedicated to working independently, these three clubs share a common goal: to support emerging design in the United States by raising the visibility of young designers, helping them find an audience and, ultimately, structure a business. Paralleling a movement on the national stage by the National Design Policy Initiative, these clubs compensate for a serious lack of design support with their own gumption. 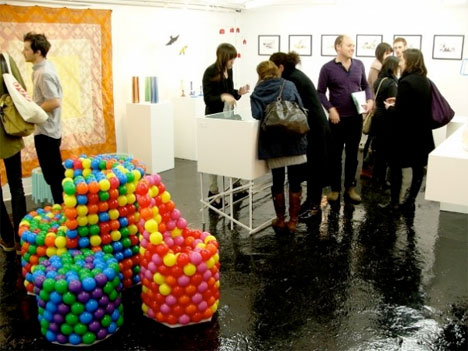 Hue Are You?, American Design Club's second exhibition at The Future Perfect, 2009 (photo courtesy of the AmDC) 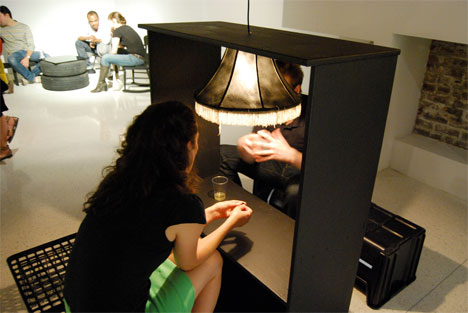 Modified furniture was auctioned to raise money for The Promise of this Moment, an exhibition co-produced by The Object Design League and the Mighty Bearcats

Nor does the United States provide the grants that support young Dutch and French designers during their education and in the vulnerable early years of their careers. American design graduates have to fend for themselves and generally end up taking jobs to make ends meet, leaving them with little or no time for creative experimentation.

Rawsthorn's article, published in the same 12-month period that the AmDC, JOIN and ODL formed, encapsulates much of the same concerns voiced by the founding members of these clubs. This includes a large gap between independent design and big industry with few opportunities to exist in between; a fragmented education system that doesn't give designers the tools to build independent studios; little to no resources or support for emerging designers that aspire to work independently; and a lack of representation of American designers both stateside and internationally. Though their structures vary, these clubs aim to find a way through this difficult environment, creating a new terrain for young designers by producing exhibitions, organizing public events, developing relationships with local manufacturers and sponsoring projects with a collective pool of funds.

Because design is not categorized within the sciences or the humanities, students generating valuable ideas through design research do not have the federal support that their peers do.

For example, Tunstall confirms that "if you are a design student conducting research, there are no major governmental/federal bodies that you can apply to for funding because design is not categorized within them." The National Science Foundation and the National Endowment for the Humanities both provide grants for student research (the National Endowment for the Arts used to do this but no longer awards funds to individuals). Because design is not categorized within the sciences or the humanities, however, students generating valuable ideas through design research do not have the federal support that their peers do. Tunstall attributes this to the dated assumption that design is funded by clients, which does not take new models of contemporary design practice into account. Basic design research grants would help individuals within the educational system, but what about new graduates trying to start their own business? The UK, the Netherlands, France and other European countries offer diverse avenues of support to young professional designers. Tunstall says that the US should follow suit, and invest directly in design by creating an "innovation incubator grant," a funding structure that would provide material resources and mentorship, helping young design businesses get through their first two years, become profitable, and continue to experiment with new ideas and perspectives.

JOIN is also establishing credibility with local manufacturers by organizing "factory tours." Conducted by the founders of the organization, these tours aren't for sightseeing. Rather, they are used as a way to begin a conversation with a local manufacturer and understand their capabilities, which are then distilled into a set of guidelines that is presented to the design community at large.

Furthermore, the NDPI proposes a reinvestigation of the US patent structure, which grants patents into two categories: "Utility," which protects an object's function and construction, and "Design," which protects ornamentation. Tunstall points out that design today is characterized by a marriage of form and function that no longer fits into these patent structures, resulting in a lot of unprotected work. Furthermore, the legal knowledge and financial investment required to file for a patent is a huge barrier to new designers with less resources. To counteract this, the NDPI is proposing a design-specific patent category and working on making the filing process more accessible, in order to encourage the enthusiasm that young designers have for experimentation rather than deter it. 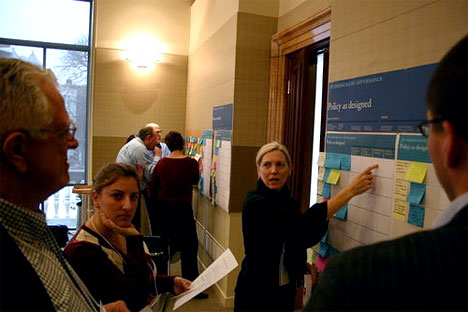 At the regional level, the NDPI is joined by groups like Design West Michigan (DWM), the Design Industry Group of Massachusetts (DIGMA), and New Kind in North Carolina. These groups, founded between 2007 and 2008, organize state officials, design industry leadership, and educational institutions to promote design as an agent of economic growth and social change in those regions. According to Beate Becker, the Founder of DIGMA, much of what they are trying to do begins by raising the visibility of design by connecting designers to each other and to outside industries. For Matt Munoz, of New Kind, regional specificity is important—how can rural areas of North Carolina both contribute to and benefit from the design industry? DWM, led by John Berry, seeks to build upon Michigan's pre-existing design culture (Haworth, Steelcase and Herman Miller) by finding a way to quantify their economic impact and encourage more design activity in the area. Despite their lack of formality and specific socioeconomic agendas, the AmDC, JOIN and ODL also contribute to this regional movement by connecting designers and raising local design awareness, where, according to Tunstall, design's impact on everyday life is most apparent. 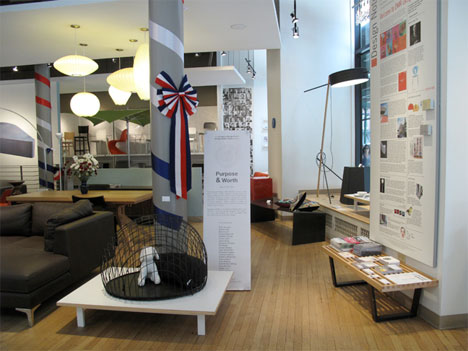 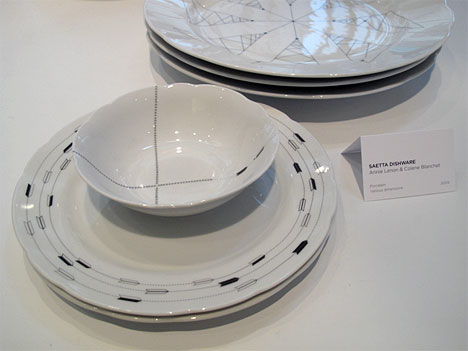 While designers are perfectly capable of working through obstacles on their own, the importance of these clubs lies in the formalization of solutions. In other words, clubs allow designers to share knowledge, share experience, and produce a structure through which to solve these problems collectively.

In addition to exhibitions, JOIN seeks to cement the design community in Seattle by creating connections with local industry while raising design awareness in their community. Formed by Jamie Iacoli and Brian McAllister in July of 2008, their activities include producing an annual design review of emerging American work, profiling Pacific Northwest Designers on their website, maintaining a Seattle design event calendar and blog, and working with Brite Collective, an offshoot of JOIN that focuses on producing design events for non-designers. Interestingly, JOIN is also establishing credibility with local manufacturers by organizing "factory tours." Conducted by the founders of the organization, these tours aren't for sightseeing. Rather, they are used as a way to begin a conversation with a local manufacturer and understand their capabilities, which are then distilled into a set of guidelines that is presented to the design community at large. According to Iacoli, this fosters lasting relationships between designers and their industrial counterparts by establishing familiarity, trust and the promise of more work, which may persuade manufacturers to experiment with unorthodox processes or lower their MOQs (minimum order quantities). 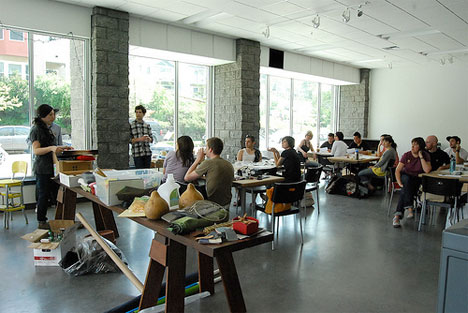 The BRITE Lite design workshop, organized by the Brite Collective in Seattle, May 2009 (photo courtesy of Jean Clee) 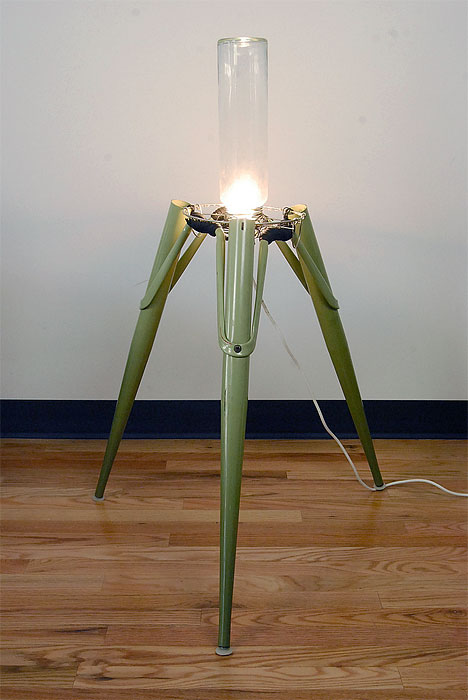 Finally, the Object Design League, founded by Caroline Linder and this author in February of 2009, seeks to support independent, experimental design in Chicago by providing a consistent front under which to unify, pool resources, self-promote and sponsor design events. While we engage in many of the same activities, our structure is a bit different from the other groups: we have a formalized member base, from which we collect small, biannual dues. These dues become part of the resources we use to sponsor shows and events. For example, our inaugural show, "The Promise of This Moment" began as an idea presented to us by The Mighty Bearcats, a Chicago design collective. They developed the concept and secured the space beforehand, partnering with us for the implementation of the project, using our network to release a call for entries, stage a fundraiser, get installation help and generate publicity. Ultimately, we'd like to continue to develop our role as one of sponsorship and promotion—this year we're planning to show off-site during ICFF, oversee the creation of a small design-publication, and organize a retail opportunity for Chicago designers during the holidays, and continue our ongoing series of pecha kucha-like slideshows. 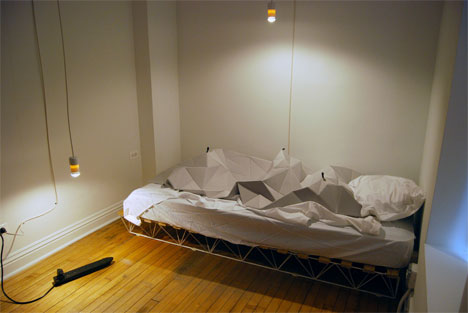 Teton Blanket by Bryan Metzdorf at The Promise of This Moment, June 2009 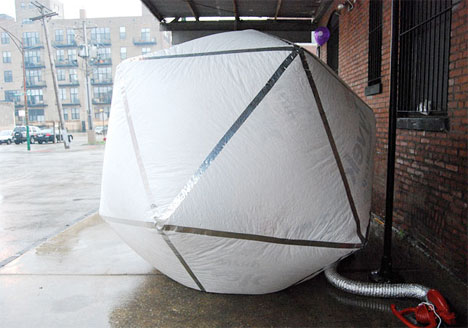 While designers are perfectly capable of working through obstacles on their own, the importance of these clubs lies in the formalization of solutions. In other words, clubs allow designers to share knowledge, share experience, and produce a structure through which to solve these problems collectively. According to Christine Atha, Associate Professor of Design History at the School of the Art Institute of Chicago, the sustained structure of a design club is one of their most important assets—by establishing a credible reputation through shows, publications and press, they can legitimize designers to larger entities like manufacturers, potential clients, and the general public, "brokering relationships" between them. This could facilitate the growth designers need to occupy the highly desirable but sparsely populated area between moonlighters and large product consultancies: that of the "small, independent and daring." 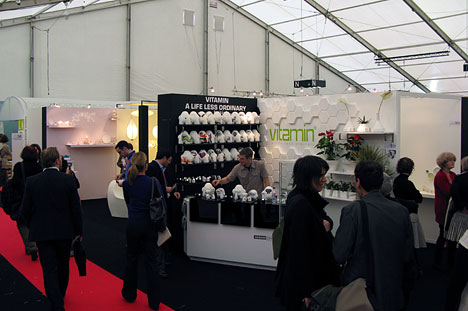 In fact, Atha points out that these types of clubs don't even exist in the UK because young designers are already very well supported—partnerships are often created for them. For example, the privately funded Hellen Hamlyn Centre sends Royal College of Art graduates to conduct research at visionary companies, paying them as staff for one year. At the same time, the British European Design Group sends emerging British designers on a tour of international tradeshows, allowing them to bring their work to a larger audience. The National Endowment for Science, Technology and the Arts has a special subdivision to support new design businesses through grants and consultation, and the British Design Council focuses on the partnership of design and business. While much of these programs are built into the proposal developed by NDPI earlier this year, until fully realized, young designers are doing it for themselves. 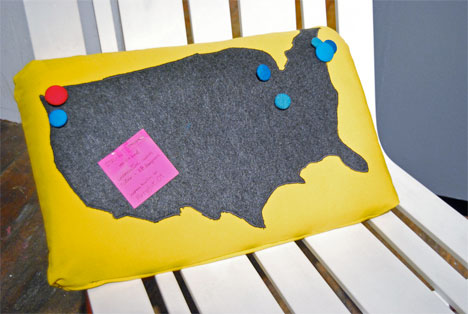 Lisa Smith is a designer, educator and writer based in Chicago, IL and Ann Arbor, MI.

Design Club: Why young American designers are ganging up