Will the real Coca-Cola logo story please stand up? 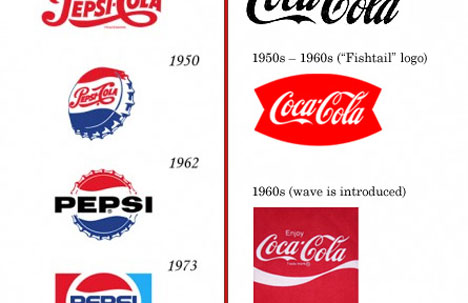 The brand-sensitive among us (you know who you are) have been gleefully passing a certain image back and forth among themselves over the past week or so, skewering Pepsi for its constant attempts to improve upon its logo by dramatically altering it, as compared to Coke's steady hand. If you haven't seen it yet, Consumerist's take is here, Buzzfeed's is here, and a search on "Pepsi Coke logo" will yield a few hundred other locations.

Trouble is, like most "simple" explanations of why this guy succeeded and that guy failed, this one commits grave sins of omission, and thankfully we've got the Brand New blog at Under Consideration to set us straight. It turns out that, while Coca-Cola's current logo is substantially similar to versions from the early 1900's, it too has gone through significant tweaking and a few ill-advised alterations over the past century ("New Coke" anyone?).

The two blogs mentioned above have amended their original posts to include, dismissively, the more precise history outlined by Brand New, but we wanted to bring a little extra attention to the underlying conceit that makes such histories so appealing in the first place: the idea that "all you have to do" to have a great logo/design/brand is come up with one brilliant idea and let it shine. As the full Coke history (after the jump) shows, the first attempts at the now-classic swoopy, cursive logo are pretty inelegant. There's something timeless in there of course, but the beauty of the current thing owes as much to subsequent gentle tinkering as to some initial flash of logo genius.

It's not that Coke left its logo alone, it's that it didn't decide to chuck the whole thing and start over every time a change was in order, as Pepsi repeatedly did. Good design is hard, but good re-design may be even more so.