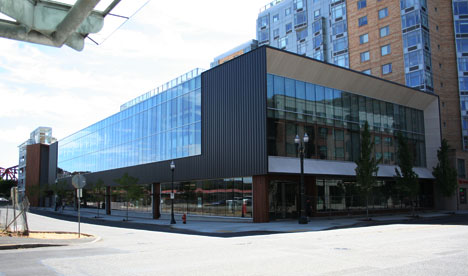 The first thing that strikes you upon viewing the new Ziba headquarters is its size. It takes up most of the streetfront on two sides of a block on the edge of Portland's Pearl District, floating with unlikely grace atop an expanse of vacant retail space.

That space, founder Sohrab Vossoughi explains, serves several functions: once rented, the retail will help offset the considerable expense of construction; it encompasses some portions of the headquarters that would be less practical on higher floors, like the model shop and parking space for 60 bicycles; and it elevates studios and project rooms full of confidential material out of easy view. This "box on a plinth" construction has already been explored by Portland's giddy architecture press, and the effect is oddly charming: a sparse, airy box whose presence has been literally jacked up. The moment of the building's unveiling, too, adds to the impression of loftiness and improbability: at a time when design consultancies across the globe are shedding staff and costs, the construction of anything grander than a shack imparts a sense of optimism bordering on foolhardiness. 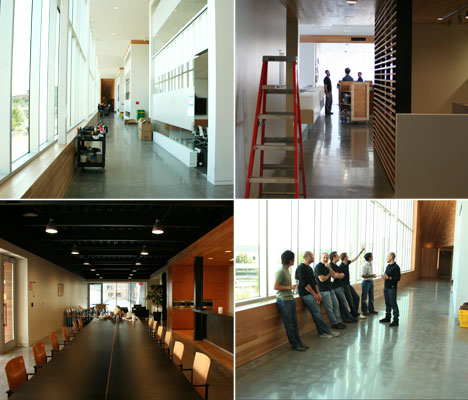 What's been created here is somewhat more than a shack though, and when compared to most design firms, it's hard to get over how big the place is. 42,000 is a lot of square feet for a studio, especially when they're replacing just 26,000 of them, in a far less iconic, more cloistered space a few blocks away. Once inside, the sense of bigness intensifies, in part due to the sightlines of the two "streets" that stretch the length and breadth of the building, but also because of the unexpected interconnections that stitch the various sub-spaces together. Our half hour tour had Sohrab and I ducking from shop to auditorium to kitchen to library in sequences unexpected enough to evoke secret passageways or games of "Clue" -- "Oh, it's very much on purpose," he explained. "We want to keep people interacting and mixing, all the time."

The mixing intention is persistent, in every aspect of the space. Desks are communal affairs, small segments of longer six-person tables, which everyone questioned agreed are adequate but retain a temporary feel: "This'll probably all be completely different six months from now," explained Interaction Design lead Bill DeRouchey, in an excited and slightly exasperated tone, though this probably has as much to do with the timing of the tour, on Ziba's first day of official occupancy, as anything else.

The tour, summarized here in a six-minute video, highlighted a few other features too, ranging from sensible to odd. The "street" analogy is, for instance, part of a larger framework based on urban design terms, including "plazas" and "neighborhoods" where the work gets done. They're still hashing out the terminology (other designers referred to the same communal spaces as "pods" and "design bays") but the logic is reasonable: individual workspace is general and mixed, while most of the work is conducted in adjoining, client-specific project rooms.

more photos after the jumpThe new space also suggests a more welcoming presence for the famously introverted firm, most explicitly in its impressive auditorium. Seating 200+ people, Vossoughi intends the space to be both a meeting and presentation room, and a point of interaction with the greater Portland community. In this second capacity, it's already received attention from hopeful local organizations ranging from professional groups to schools and churches. Other notables include a range of energy-saving features (the building's expected to earn a LEED Gold rating), two outdoor break areas, a dedicated materials and reference library, client reception rooms with showers and media centers, and a large number of Ziba-designed details, from door handles to bathroom fixtures. 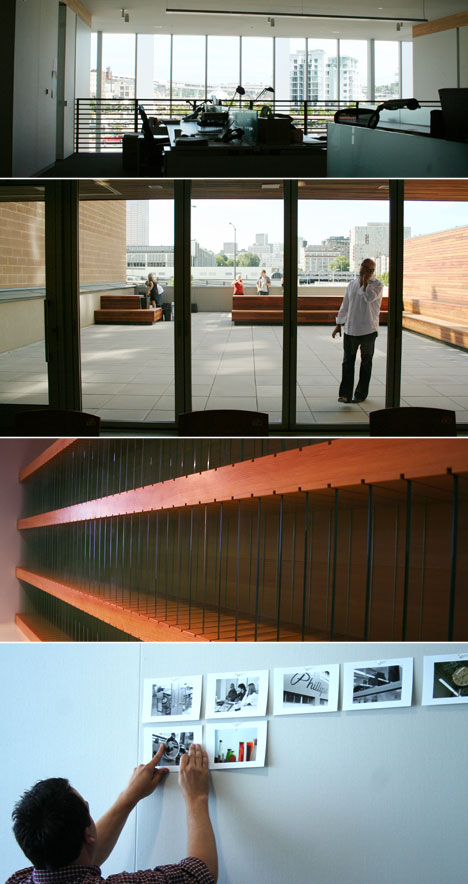 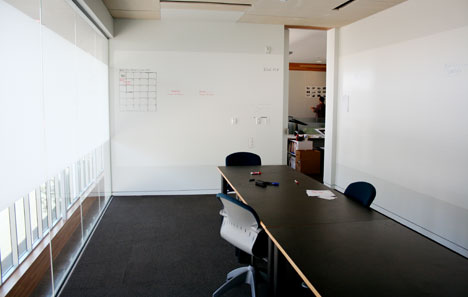 one of 16 project rooms -- every wall is a whiteboard 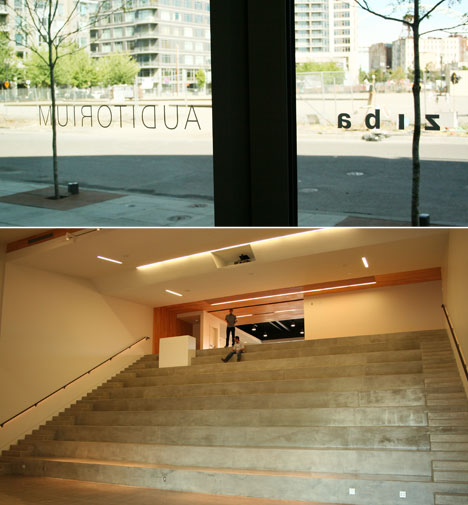 the auditorium -- the seats are still in design review