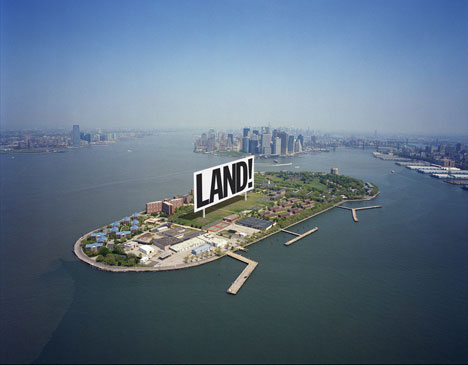 It's the 400 year anniversary of the arrival of the Dutch in New York. Given the strength of Dutch design, it's no surprise that this is being celebrated by designers in NYC, first by Jan Habraken and Alissa Melka-Teichrow's exhibition 400 Years Later (covered by our video crew at ICFF in May) and now with Pioneers of Change, a Dutch design festival that will take over Governer's Island for two weekends this September.

In addition to work from all of the above, there will be a Dutch pop-up shop (all merchandise under $100) and a series of discussions between designers from the Netherlands and New York concerning contemporary notions of luxury (for a start).

Don't miss this! Get full program and attendance details here.

LAND! Image by the Experimental Jet Set for Pioneers of Change, courtesy of Droog