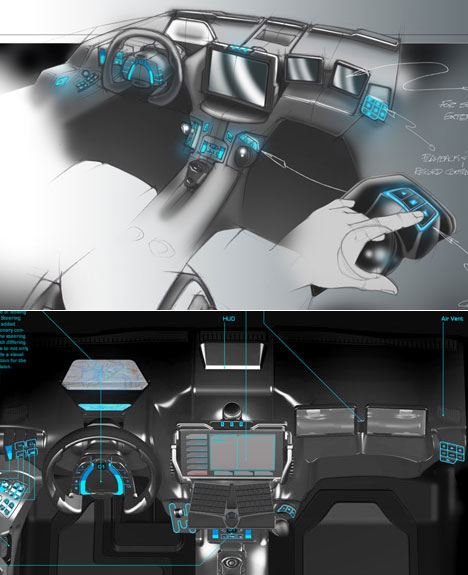 Massachusetts-based Matthew White displays some impressive re-think skills and thoughtful, intelligent design touches in his project re-imagining police cruiser interiors. In preparation for the project, White went through interviews with members of the Boston police department on how cops really use their cars.

Although policemen are the ones who write us tickets for not wearing our seatbelts, ironically they are informally excused from wearing theirs due to their bulky utility belts, hip-mounted pistol holsters, and occasional need for quick egress. And not wearing a seatbelt is hardly a luxury for police; they often fare badly in car accidents.

White's design thinking doesn't stop there: The backseat "perp bench" has been redesigned as well, taking into account officers' complaints about having to closely watch potentially troublemaking suspects.

Most passenger cars elevate the back seat to a higher level than the front seat, enabling rear passengers to have a better view. Realizing this is an inane thing to offer people who are essentially apprehended suspects and may try to escape, White does the opposite, dropping the seat to minimize movement and leverage and incorporating amusement-park-ride-like swing-down restraints. The rear seat is also seam-free, making it both easier to clean and harder to hide contraband in. 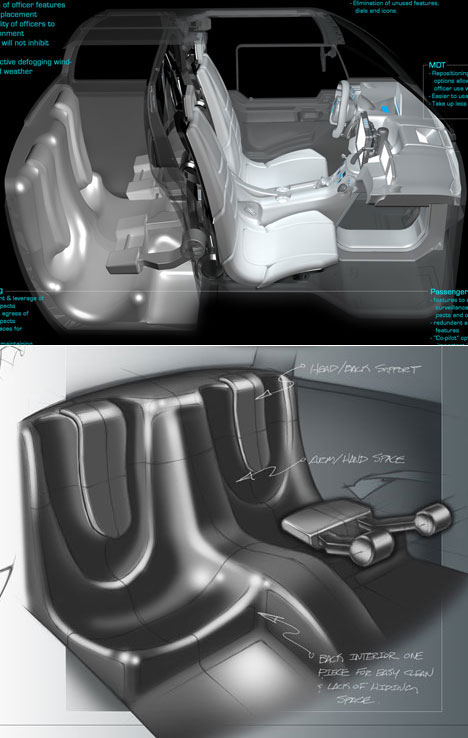 Going back to the front seat, the dashboard has been optimized to give policemen the kind of information and controls they need. The steering wheel houses the radio, lights and sirens controls and sits beneath a simple digital speedomoter. Above that is a GPS heads-up display.

In the center of the console is the MDT, or Mobile Data Terminal. The police interviewed admitted to using the MDT even when driving the car, which is not supposed to be done but, like regular civilians sending text messages while driving, often is. Taking this reality into account, white has elevated the MDT closer to eye level, so the officers at least have a better chance of keeping their eyes near the road while referring to it.

On the passenger side are dual monitors, which the shotgun-riding officer can use to monitor the backseat or the exterior of the car.

Lastly, White even looked into what existing U.S.-made car platforms would work for the redesigned interior.

Check out the rest of the project, with full-sized shots and many more details we couldn't list here, on Coroflot.