Book Review: A Fine Line: How Design Strategies are Shaping the Future of Business, by Hartmut Esslinger 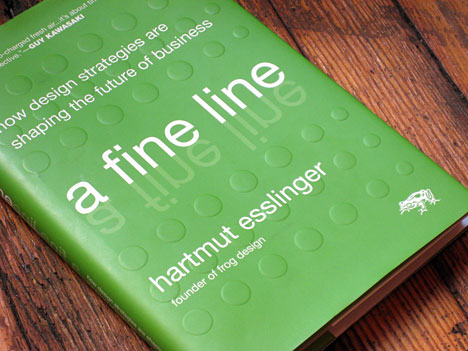 While not exactly summer beach reading, Hartmut Esslinger's new book on Design Strategy, A Fine Line crams as many ideas, themes and disparate story arcs into its 180 pages as a Dan Brown novel. For the first few chapters Esslinger follows the tried and true business book methodology of using real world examples to illustrate lessons in leadership and strategy. For the last three chapters, he begins to apply the design lessons he learned in the corporate world to what he terms "industrial-colonial capitalism" -- the problems of the modern age caused in part by the last century of design strategy. The beginning brims with ideas and scattershot observations about people and companies that occasionally distract from the underlying message, but by the end Esslinger has hit his stride, talking about big ideas applying principles with real insight.

Esslinger's clearly not afraid to express his own opinion and in the early pages. When he recounts the garage days of his fledgling consultancy, frog, the book engages in a fair amount of "I told you so," and name dropping as he heaps praise upon friends (e.g. "the brightest minds of our age, including Dieter Motte, Akio Morita and Norio Ohga of Sony ...") and scorn upon enemies (e.g. "including Paul Kunkel, who wrote a largely inaccurate and trashy book about Apple's Design in those early years"). Depending upon your perspective, these early chapters could be refreshingly candid or unpleasantly gossipy. That said, Esslinger's certainly entitled to a few "I told you so's". From his very earliest work, when he proposed that the clockmaker Kienzle use radio signals to synchronize with an atomic clock (in 1968!) his brand of design thinking was met with frequent skepticism and disdain. Today, however, companies all over the world chase the sort of strategic design thinking that frog pioneered, radio clocks are a standard (you've probably even got one in your pocket, depending upon whether you set your cell phone's clock or it's time zone) and Kienzle clocks are mostly museum pieces. Fortunately, much of frog's design is still in production. 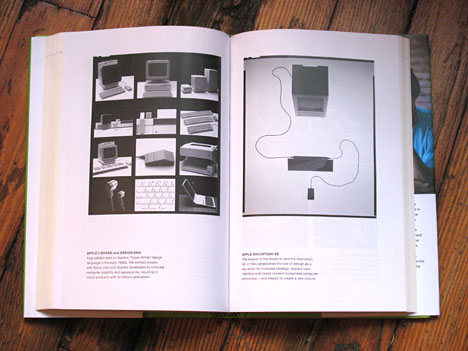 Although the first relationship that established his reputation was with the television company WEGA (which was acquired by Sony), before long frog opened a California office. Since design and business in the early 20th Century seem to intersect somewhere around Cupertino, it's not surprising that A Fine Line spends quite a few of its 180 pages on Apple. Even though A Fine Line targets a business audience, for designers this part of the book is a little disappointing since "process" is often shortchanged. When Esslinger describes his history with Apple, the anecdotes tend to be more personal than business oriented. When the fledgling Apple Computer Company went hunting for a design style, Esslinger's small consultancy won the bid with what became known as the "Snow White" design language. It would be easy to imagine that the "Snow White" phrasing came from the color palate, or perhaps arose by reclaiming the epithet hurled at his German compatriot Dieter Rams, but Esslinger provides no insight. In describing their initial engagement with Apple, Esslinger focuses instead on Jobs' personality and mudslinging Paul Kunkel (see the scorn above), but it was only in Kunkel's book that we could find the etymology of "Snow White." Kunkel states that the name actually came from Apple's pre-prototype codenames for seven products which were named after the seven dwarfs. Design details like those prototypes and processes insights like the decision to tool zero draft angle molds for the computer case would have been welcomed by our design audience, but are missing from A Fine Line. While details like that might have seemed extraneous to a business audience, they were critical to the design team and to get future management teams to appreciate them, it would have been helpful to see them articulated here as well.

Aside from the occasional hyperbole and gossip, however, Esslinger's case studies underscore valid business points. He uses the 1985 ouster of Jobs from Apple to illustrate how market share and stock price improvements can mask the elimination of "innovation capital." Only once Jobs returned in the late 1990s did the company get its mojo back. A Fine Line applies this same lesson to Motorola (who cashed in on the RAZR, but lost their core values), Maytag (cashed in on reliability), Sony (failed to recognize convergence trends in personal electronics), and many more. Esslinger cites visionary leaders as the way to avoid these enormous pitfalls, but then in his next chapter, "Design to Win: The Creative Business Strategy," he illustrates exactly how to execute strategic thinking in cubicles as well as the boardroom. Toward the end of the chapter, he distills the strategy into a simple formula: "Culture + Process = Profits." To an extent, the history of the business cycle is littered with companies who forgot the culture and the process and focused directly on the profits. While operating efficiency can be used to increase short term profit, that's a tactical choice, and one that often overrides strategic goals. Anyone can gain margin by sending parts overseas. Finding the courage to ignore short term fluctuations in share price and instead focusing on nurturing culture and process takes visionary leadership.

In the latter chapters, Esslinger takes his philosophy from the boardroom to the outside world. In "A Business Design Revolution," he addresses product life cycle assessment and the externalities tied up on product disposal. Some facets of his green manifesto are implementable in the near term (material cost savings, modularity), but many others require shifts in the political environment or public perception that individual firms cannot leverage into business success. Unfortunately, as the world has become networked, the world's problems have become interconnected as well, such that most of the world's looming problems cannot be solved by individuals, corporations or even governments. Now they require intra-government cooperation on a world scale, and we have a pretty bad track record at that.

Fortunately, his last two chapters focus on international manufacturing, and consequently on co-design. While he cites Alix Rule's blog observation that "The Revolution Will Not Be Designed" as acknowledgement that design can't save the world, his last chapter "The Factories," might begin to present evidence that it can (even if he didn't mean it that way). Outsourced production has long been a haven for externalities and hidden costs. Esslinger announces his love for factories and production and then heaps praise upon the abilities of Asian manufacturers to produce customized products. There is, however, a major caveat. Esslinger describes several circumstances where outsourced production meant to reduce costs and improve productivity actually has the opposite effect, where unforeseen complications wind up adding to costs. He indicates that increased communication with foreign factories is the only way to overcome this hurdle. By gaining an intimate familiarity with foreign factories through communication, companies can use outsourcing to achieve greater insight into the production and consequently their products. As an industrial designer, I would argue that this insight is simply a corollary to his earlier "Culture + Process = Profits" equation. By distancing themselves from the end manufacture of their product, companies are also distancing themselves from their culture and their process. While that distance may translate into short term share price improvements, companies that lose sight of their culture, their customer and their competition in favor of share price are likely losing their strategic vision and their soul. Esslinger teaches that there are lessons to be learned from the factory floor, not just by designers but also by management.

Book Review: A Fine Line: How Design Strategies are Shaping the Future of Business, by Hartmut Esslinger