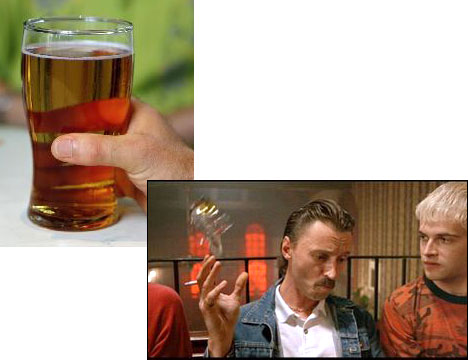 In the more dangerous New York of the early '90s, the glassware of any off-the-radar nightlife spot was a dead giveaway to the sort of place it was. The ones that served drinks in plastic cups and had tin ashtrays were generally more trouble-prone. You knew this because one night you'd be at a place that used regular glasses, a fight would break out, and someone would get a glass, bottle or ashtray smashed into their face; next week you'd go back and all of the cups would be plastic.

I'd always naively thought of this as a bygone phenomenon, but apparently fighting with glassware is still an issue in Great Britain. According to statistics 5,500 Britons a year are involved in booze-fueled altercations that end in shattered glass and stitches, and the United Kingdom's Home Office Minister Alan Campbell feels the problem can be solved through design: "Innovative design has played an important role in driving down overall crime, including theft, fraud and burglary," said Campbell. The Home Office has thus commissioned a new plastic cup design for pubs.

Unsurprisingly, there's opposition: The British Beer and Pub Association is naysaying the plan. "For the drinker, the pint glass feels better, it has a nice weight and the drink coats the glass nicely. That's why people go out for a drink, to have a nice experience," says Association member Neil Williams.

But Nick Verebelyi of the company Design Bridge, tasked with designing the new plastic cup, is determined to make it work.

"One [approach] is to coat the glass with a substance that will make sure the glass doesn't shatter into pieces when it is broken - that could be a plastic material for example. But it would have to feel like an existing pint glass to the consumer."

Mr Verebelyi [is] also looking at changing the pint altogether.

"We could do something more radical, by looking at the whole shape and substance of the pint--we could come up with something that is completely different to glass.

"Remember that years ago people used to drink out of pewter tankards. It could be quite a significant paradigm shift."