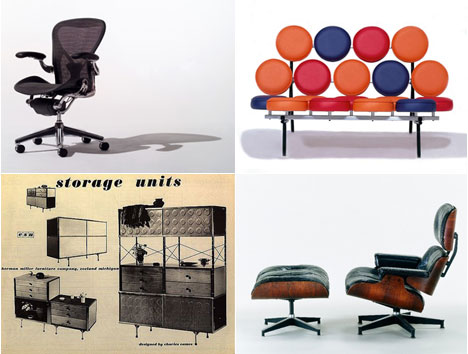 MMA Executive Director Judith A. Hayner's long-standing interest in modern design sparked a dream of showcasing original designed artifacts along with their drawings and prototypes.

...Commenting on the idea behind the exhibition, Mr. Berry observed, "Many people are confused by the difference between art and design. Design is a noun, a verb, and a problem solving process. It is art with a purpose. Good design requires a clear understanding of the particular need, conditions, constraints, and opportunities. Good design does not happen in a vacuum."

"At Herman Miller, design is the means and the end," said Berry. "It is the starting point and the destination. Since 1931, not long after its founding, Herman Miller had embraced design as a way to improve people's lives, and through that goal, they created new industries and some of the most iconic objects of the last century. Charles and Ray Eames's molded plywood Lounge Chair, George Nelson's Marshmallow Sofa, and Bill Stumpf and Don Chadwick's Aeron Chair which populates so many offices today, are all products of Herman Miller, Inc."