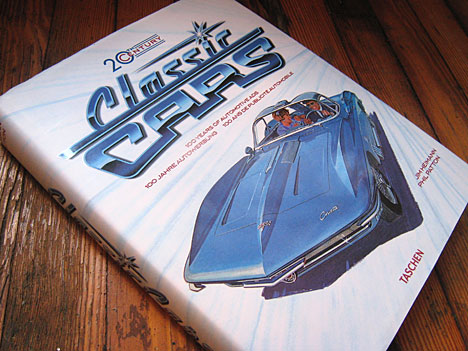 The collapse of the US auto industry stands as one of the national tragedies of this generation, but it also provides boundless opportunities for ironic reflection when looking through a book like Heimann and Patton's Classic Cars. The first time we opened their book of historic auto ads, it revealed a blue '67 Olds Toronodo, complete with a matador against a red background, framed against the caption, "After you've walked off with all the honors, what do you do for an encore?" Regrettably we've found out. The copy on the back of this coffee table books contrasts the Stone Age and the Bronze Age with the 20th Century -- The Automobile Age. The 20th Century has come to a close, and there's little doubt that the age of the automobile is at an end as well. That said, a hundred year retrospective on any human endeavor reflects not only on the products produced, but upon the values and the cultures that produced them. 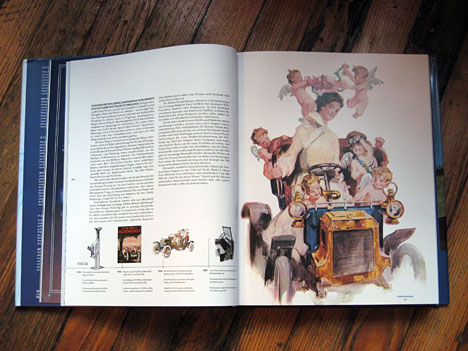 So while Classic Cars is first and foremost a record of the graphic design that accompanied one of the first mass-produced assembly line products of all time, it also stands as a visual history of the industrial design of the 20th Century ... and all of its attendant successes and missteps. Heimann covers pop culture for Taschen and Patton writes about automobile design for The New York Times, so their catalog of auto ads not only covers the classics like the Jaguar XK-E or the '66 Mustang, but also cars like the Paige and the Lozier which exist now only in the air conditioned garages of white haired men who fancy themselves collectors. I couldn't find some classic early automobiles like the Duesenberg J (one apocryphal origin of the term "what a doozy") in their book, but perhaps that's because the advertising medium barely applied to cars, or to the social class that could afford them, at that time. The advertisements themselves stand on their own merit. Most of the early ads are hand painted, a lost rendering art these days, and echo the Art Nouveau posters of Alphonse Mucha. Whether ignoring the naive copy meant to solicit purchase or not, those early ads have an artistic sensibility that stands on it's own merit. While the written copy itself often confounds the rules of the grid, the earnest tone of the words hearkens back to an era where a ownership of a car was tantamount to success and we didn't even know cigarettes were lethal. 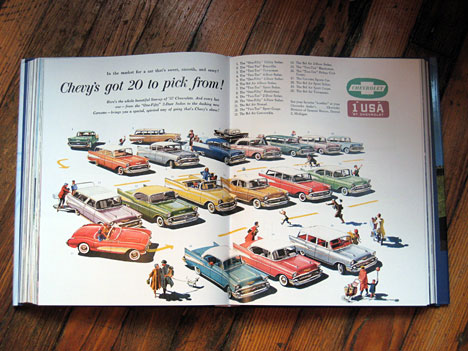 Arranged chronologically starting in 1900, Classic Cars alternates between full bleed prints of classic posters and essay content (in English, German and French ... though perhaps the next century will include Japanese and Korean as well). A timeline is included below the essays with notable events in the history of automobiles and thumbnail sketches of the cars they reference. The text oscillates from history to cultural reference to social commentary, but the real heart and soul of the book is the posters. After an introductory essay on the Automobile Age, the content moves to historical record. While for very early cars like the Packard 38 the "ads" seem more like figurative art, by the 1927 Studebaker Chancellor, the copy begins to sell a lifestyle, "regal beauty at a democratic price." All the way through the '50s the cars are uniformly American, and the scale of the ads provides insight into the level of sway that automobile culture held over America during that era. An advertisement for Chevy in 1957 at the height of their powers proclaims, "Chevy's got 20 [models] to pick from!," bragging about what would become a quality control disaster and a management hurdle that wouldn't be overcome for decades. 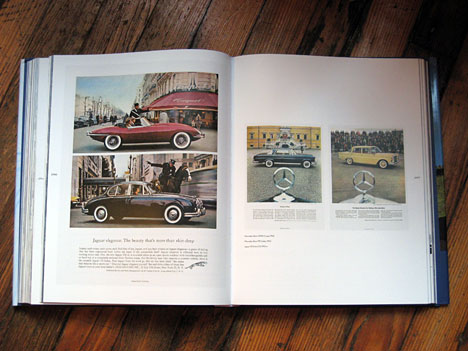 Of course, it's easy to pick a fight in retrospect for an era where the Ramond Loewy streamlining that led to the '57 'Vette (also pictured and still sexy) had people lining up to buy them. By the '60s the German VW "Bug" had led American motor companies to produce their own compacts, although European cars like the Porsche 924 and the MG had begun to gain traction. Also by the '60s, ads for Japanese cars like the Toyota Corolla ($1,798!) begin to make a showing, although by then, the visual artistry of the advertisements had begun to take on more modern sensibilities, and lose some of their splendor. By the time the Honda Civic and the Subaru make an appearance, the end of the era begins to show its teeth. How a car like the Ford Pinto or the Chevy Vega can possibly compete is almost a moot point. 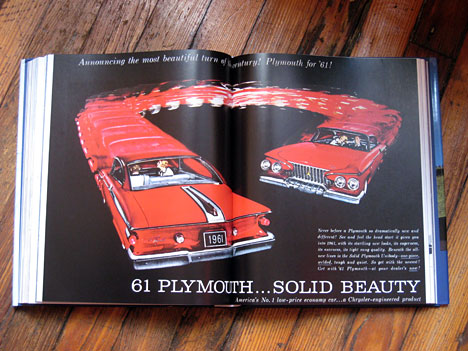 By the time the 1973 Porsche 911 Targa appears, American dominance seems to be fading, even though the copy, "That's IT!," retains it's naivete. Consequently when the "new" Beetle appears in 1999, hearkening back to a less critical era, we, the reader, know that something special has come to a close. That said, the cars of these eras represented the pinnacle of what industrial design could do and precisely because the cars were such big-ticket items, the ads that promoted them as panaceas for the ills of everyday life illustrated not only the best that our designers could do, but the height of Madison Avenue's ability to sell dreams. Looking back at a century of anything demonstrates the transience of trends and the nature of creative destruction and disruptive technology in a way that might take business books hundreds of pages to express. Whatever the reader may learn from looking at the pages within, whatever joy might be gained from looking at 500 pages of hand rendered cars, whatever memories we might have of backseat makeout sessions, there's no denying that it's been a hell of a ride. 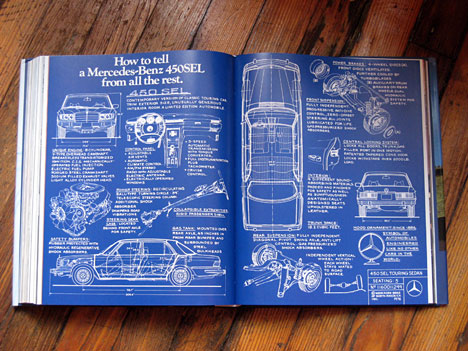 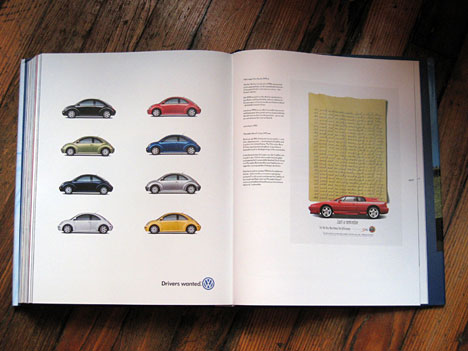