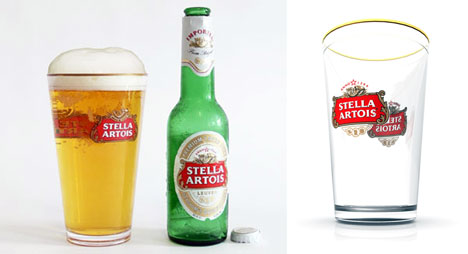 In response to Monday's post on forthcoming plastic pint glasses for pubs in the UK--and the attendant outcry by bar patrons--we received a report from Sydney-based industrial designer Andrew Simpson, who has experience with this particular problem. Simpson's company, Vert Design, was commissioned by Fosters to design a plastic pint glass for use on a a rooftop bar, and he shared with us some of the findings from his process:

Most pub-goers are presently happy with the pre-existing pint glass and see plastic as a lesser value product; most plastic glasses in Australia are made from acrylics. When we looked into the perception of value we found the acrylics failed in 4 ways.

1 - They are lighter then glass and feel like a disposable product, 2 - they flex when squeezed, 3 - they do not chill or transmit the chill of the beer to the hand and lip of the drinker, 4 - they scratch easily and soon become opaque.

We found that all of these problems could be solved through material selection...

Hit the jump to read Simpson's solutions, which go refreshingly in-depth and into the design minutiae....In response we made two batches, one using polycarbonate and for the second batch we tried a new material called Tritan. Tritan holds similar properties to polycarbonate but as a bonus it is BPA free â€“the Tritan and the Polycarbonate are both water clear, tough and rigid. The two materials don't flex when squeezed and remain clear and un-scratched in high use. Whilst these materials weigh more than the acrylic we also shifted the weight of the pint cup to the lower end as to create a pendulum effect, increasing the consumer's perceived weight of the product.

For the design itself we moved away from the standard pint shape and created a clean tapered exterior and played with the thickness internally to create a lenzing effect that made the internal shape look like the standard glass. The idea was to remove the drinker's initial expectation of receiving a glass pint and then build up their respect as they became surprised at the glass-like qualities it possessed. The new choice of material allows the cup to feel chilled as the cold beer is poured in and we thickened the lip, so that the cup feels good to drink from. We even squared up the outside of the lip and then radiused the inside away to so the bottom and top lip touch different types of surfaces (I did think most people notice).

Research with Fosters also highlighted that 40% less carbon would be emitted during the manufacturing process of our cups instead of the glass ones, as the plastic is lighter for shipping and has far less embodied energy as there is not annealing or need to heat large furnaces. The new plastic glass last longer then the glass in pub use. The average life of a glass in a busy pub is 4 months with most glasses breaking from thermal shock (hot to cold). The plastic pint lasts over 2000 cycles before they start to discolour â€“ so it's even better for the environment.

With the right mix of material properties, ergonomics and design, we believe a non-glass solution can definitely be found and not ruin your night out.