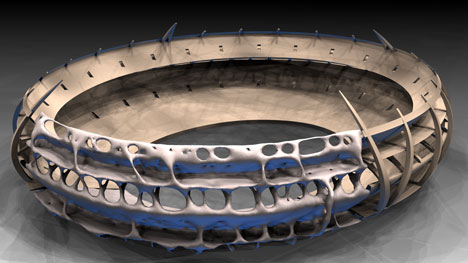 No, that's not a coliseum for interstellar gladiators from the next installment of the Alien franchise, it's a demonstration of a new set of design tools, included in the newest release of ID CAD software SolidThinking. The technology, which ST is calling Morphogenesis, is a sort of semi-automated biomimicry toolbox, and after an hour-long phone and webinar demo last week, we have to say it's unlike anything we've come across in the CAD world to date.

Starting from the long-popular design ethos of looking to nature for the best solutions, the Morphogenesis tool set works by proposing optimized 3D structures to the CAD user, based on a defined external envelope and a set of loads and constraints. By hacking away at the envelope until only the minimum of needed material is left, the tool produces some thoroughly odd, organic shapes, often reminiscent of bones or sponges. The shapes can be saved as STL or other 3D data and used as an underlay for exploring alternate designs.

The coliseum study shows one possible example, with the Morphogenesis result and its more formal interpretation presented side by side, but the ST reps emphasize that the simulations can be run with different inputs to yield a wide range of viable solutions, giving designers a creative kick-start when looking for new forms. 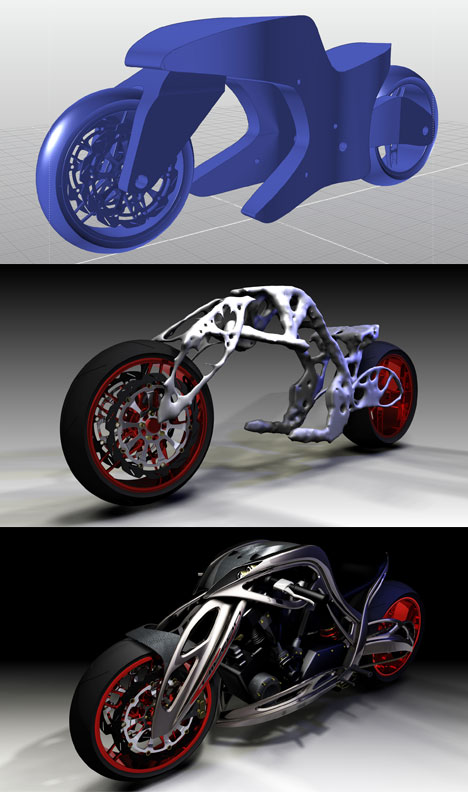 It's not explicitly an engineering aid -- the forms created are far from manufacturing-friendly -- but since the process is based on optimal material usage, using it as a design guide nudges the product towards greater efficiency, which is something engineers love. For the same reason, it could be thought of as a decent example of green technology too, giving designers hints on how to do more with less material, early on in the form-giving phase.

For more info take a look at the (relatively sparse) Morphogenesis page on SolidThinking's website, or this video overview of ST Inspired, the software that uses it (skip to just before the halfway point for a few seconds of the technology in action). 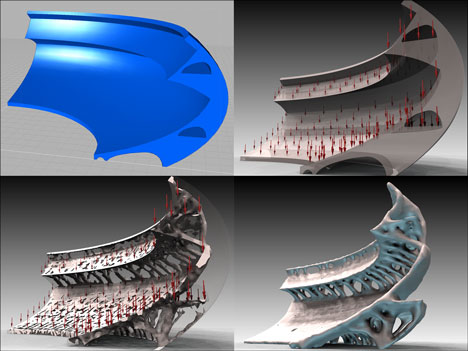