This Just Inbox: 6 new takes on the Swiss Army Knife 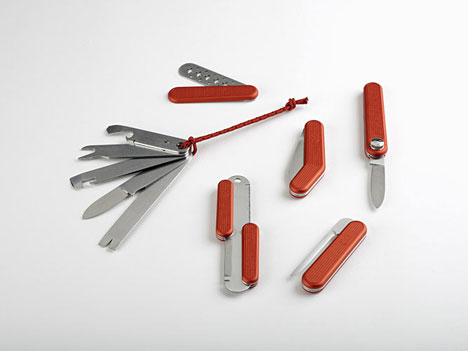 Thilo Fuente, a Swiss designer who recently graduated from ECAL in Lausanne, has tired of the endless, meaningless variations on the Swiss Army Knife. In response, he's teamed up with Wenger, maker of the original, to "strengthen the original design values by quoting the great classics and modernising some of the most characteristic details." But we think he goes further, questioning the archetype of the folding pocket knife—for some, maybe it is more handy to have the tools hanging loosely around one's neck, for others the knife is a luxury item, suited best for preparing absinthe.

All his variations are the real deal, made from anodized aluminum and original Wenger blade steel. For example:

This Just Inbox: 6 new takes on the Swiss Army Knife