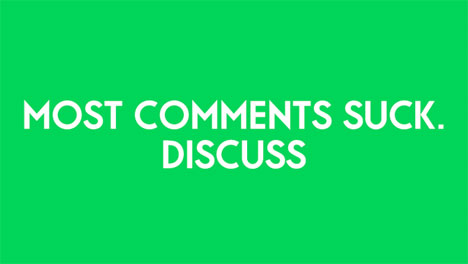 It's the bane of every blogger: comment moderation. Not only are most completely inane, it's difficult to understand how to encourage constructive commenting and discussion. Sometimes it happens and sometimes it doesn't. Which would, of course, be okay if it somehow enriched a reader's experience. Most of the time, however, it doesn't, amounting to not much more than piles of textual trash.

With Associates is as fed up with this as we all are, but proposes a new solution: to encourage discussion (rather than anonymous one-worders) by holding people accountable via Twitter. Not only will this encourage readers to think before they write, but it also has the potential to bring other twitter users into the discussion...and your website.

Here's their proposal, taken from a larger article on commenting they wrote for It's Nice That:

At With Associates our general view is to use comments in moderation and with moderation. Don't open them on everything you publish, and consider what your desired definition of 'comment' is. Do you mean comment as exclamation, conversation, discussion or conclusion? And will your participators feel the same way?

We've opted to use Twitter to authenticate users and double as a way to discourage anonymous comments. Sure, anonymity can still be achieved, but hopefully under ongoing pseudonyms that in themselves will offer consistency and identity.

We've also played a little with the convention of how comments are shown (minimising them all to 3 lines on first view) with hope to democratise the page and help the reader scan and delve deeper when intrigued. We hope this might also encourage writers to think more succinctly about their first words and so post them on Twitter to encourage others to join.

Most obviously however you will notice that comment is only open here in the new Discussion section of the site. In developing this solution it was agreed unanimously between It's Nice That and With Associates that there was little benefit in adding comments to the daily posts on the homepage. That curated content remains an offer and a reference only.

They've launched the new commenting system alongside this article, so head over there and try it out. Maybe this is the answer to creating more accountability on internet, which, despite all my misgivings, is a great way to use twitter.