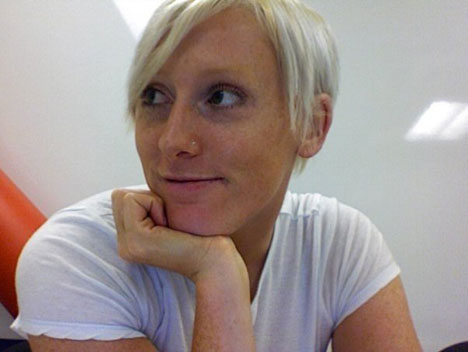 Latest news from the Creative Confab we're putting together through Coroflot: the afternoon panel's just grown by 33%, with the addition of Google Creative Lab recruiter Emily Delmont. She'll be getting the 2 Questions treatment next week, so stay tuned, but in the meantime, we can offer up a quick preview from Emily's official bio:

Emily has been with Google for 3 1/2 years. In that time, she has worked as a researcher at Google.org, the company's philanthropic wing, as well as in recruiting, most recently for Andy Berndt and the Creative Lab. Since joining the Creative Lab in May 2008, it has more than doubled in size. Before joining Google, Emily received her BA in Global Studies and MA in African Studies, and also taught and worked abroad in such places as London, Vietnam, South Africa, and Korea. She has been to over 30 countries and is always planning her next adventure. Most recently on tap was the eastern European leg of the last Radiohead tour and drooling over street art in Berlin.

The Creative Lab was established two years ago as a sort of internal branding agency devoted to building Google's identity across multiple platforms, "even some that don't exist yet," according to this interview with Managing Director Andy Berndt (formerly of Ogilvy & Mather). Sounds very exploratory and a little strange to us, and thus we're fascinated. Looking forward to hearing more from Ms. Delmont. Coroflot's Creative Employment Confab Wednesday, October 21, 2pm - 6pm (workshops: 10am - noon) The Autodesk Gallery One Market Street, San Francisco, CA