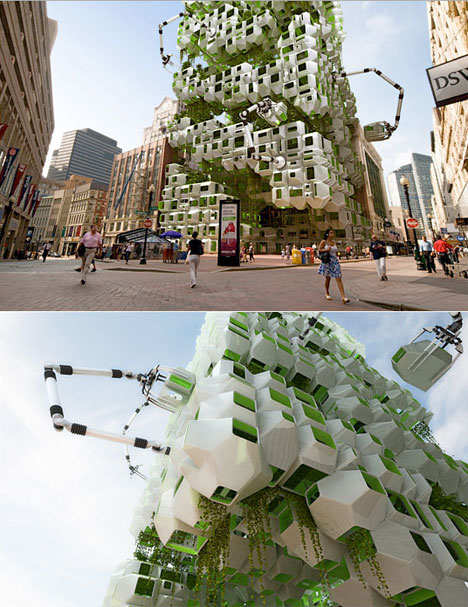 The Boston Globe asked local artists and architects to re-imagine the sites of construction projects that have stalled in response to the recession, becoming eyesores that remain separate from the rest of the city's cultural fabric.

Our favorite entry is Howeler + Yoon and Squared Design's imaginative proposal for the 32-story Filene's development downtown: a network of algae eco-pods which will turn the entire site into a large bio-fuel reactor. The reactor would serve as a center for energy production, while supporting bio-fuel research by allowing scientists to test the effectiveness of different algae species and perfect methods of fuel extraction. The structure would have other benefits as well—in addition to producing energy, micro-algae reduces carbon dioxide levels in the atmosphere without relying on arable land.

To maximize the effectiveness of the project, the whole thing would be reconfigurable by a set of robotic arms. Powered by the fuel produced by the reactor, the arms will move the algae pods around the framework to ensure that the plants have access to favorable growth conditions.

The Boston Globe is holding a vote to determine the best proposal, so go see the other projects and cast your ballot now.